Avril Lavigne has all the habits of the collector, but none of the etiquette.

We of Everybody Was in the French Resistance…Now! have already explained our objections to Avril Lavigne’s song “Girlfriend”: it is a mean-spirited attack designed to put down other girls and justify stealing their boyfriends. In our response, “G.I.R.L.F.R.E.N. (You Know I’ve Got A)”, the boyfriend in question tells Avril to leave him alone once and for all.

Ironically, her song about stealing boyfriends is, itself, stolen. Fans of the 1979 Rubinoos hit “I Wanna Be Your Boyfriend” will notice that the chorus in Avril’s song is nearly identical, save for the change in gender. The Rubinoos sued Avril in 2007 for stealing their song. It was eventually settled out of court, hopefully involving a huge cash settlement for The Rubinoos.

We of The French Resistance…Now! are raising the banner of solidarity with The Rubinoos. The b-side for “G.I.R.L.F.R.E.N.” is a cover of the original song, “I Wanna Be Your Boyfriend.” Have a listen on our Myspace (www.myspace.com/fixingthecharts) to hear how Avril ripped their song off. Then, show your support for the wronged Rubinoos by purchasing our single and b-side on iTunes HERE. We promise we will send the publishing royalties to their rightful owners.

HERE is the video for our single, streamed on Stereogum. It is an homage to the French New Wave films “Cleo from 5 to 7” and “Band of Outsiders,” and was directed by singer Nathaniel Fregoso of The Blood Arm.

Posted by THE EDDIE ARGOS RESOURCE at 04:08 3 comments:

Everybody Was In The French Resistance...Now European Tour

After our UK Tour
Everybody Was In The French Resistance...Now are touring the Continent.

Here are the dates.

America is joining in a little bit later.

Hope to see you at the shows Edx
Posted by THE EDDIE ARGOS RESOURCE at 13:43 2 comments:

Everybody Was In The French Resistance...Now had a little trial run of our live show on Friday.
I suffered a little from first night nerves. So accidentally referred to EBWITFR...N as Art Brut twice, forgot a few of the lyrics and did the 'classic' forgetting to make sure the Mic is firmly attached to the lead mistake. But besides that I think it went very well.
We've quite a few more rehearsals before the touring starts. So we will be tight and ready to go by the first date in London
And by 'We' I mean me. Dave and Dyan already have it down pat.
Dyan's cousin Geoff and his friend Lukas came down for the show and filmed some of it.
Here is Creeque Allies. (the first song in the set)

If you live in the UK our album is available as a download on AMAZON at £4.99 for a limited period. The link is HERE
The UK and European tour dates are on our Myspace HERE
Posted by THE EDDIE ARGOS RESOURCE at 10:19 4 comments: 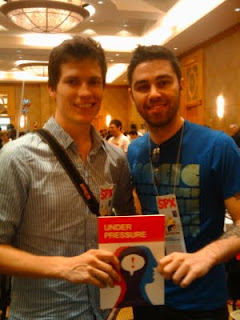 I've written a new Pow! To The People it is HERE.
It's about Under Pressure a collection of strips from Letsbefriendsagain.com
You should go and take a look at their strips they are awesome.
Posted by THE EDDIE ARGOS RESOURCE at 15:51 1 comment:

David Devant and His Spirit Wife

David Devant and His Spirit Wife are one of my favourite bands.
There was a documentary made about them in the late Nineties. I have it on VHS so consequently I haven't seen it in about 10 years. I often check youtube though to see if someone has uploaded it.
Today I was rewarded. A load of new David Devant videos including the documentary 'Oh No Not David Devant Again! ' have been uploaded.
Here it is


Their short film Light On The Surface was uploaded too. it is HERE and HERE
The album that they are talking about the release of at the end of the documentary is 'Shiney On The Inside' . One of the greatest records ever made. If you dont already own it I urge you to track it down.
I think it is available HERE their first album Work Love Life Miscellaneous is available on itunes too check it out.
Vessel/ Mr Solo / Mikey the lead singer of David Devant and His Spirit Wife has a blog/website it is HERE
and David Devant and His Spirit Wife are playing 100 club on the 4th Feb you should go.
Posted by THE EDDIE ARGOS RESOURCE at 14:30 4 comments:

I used to regularly write a thing called Pow! To The People for Playbackstl. Something I intend to start up again in the new year.
Pow! To The People was supposed to be about different comics I had read each fortnight. But it ended up mainly being me writing about how much I love Booster Gold.
Because of this Jeff Katz who ,with Geoff Johns, wrote the first 12 issues of volume 2 of Booster Gold sent me an email. We've only had a chance to hang out once but we email backwards and forwards now and again and he seems like a pretty great guy.
I'm telling you all of this as he has just started a website called GeekWeek and has asked me to contribute. Geekweek was secretly on the web for the contributers to fool around with for a couple of weeks before it was announced. Consequently I've already started checking it everyday like the internet addict that I am and I can vouch that its pretty great. And I'm not just saying that because I've been posting about Adam and Joe, Doctor Who and David Devant and His Spirit Wife on there.
If you haven't already checked it out have a look. You can follow it on twitter too.
Posted by THE EDDIE ARGOS RESOURCE at 16:56 No comments: