EWITFR...N was an unusual thing to tour. We'd written the songs a while in advance recording the album in Joshua Tree with our friend Dave Newton. When it came to touring it it sort of turned into a cabaret thing with lots of talking between the songs. I think it worked out really well. When we tour Volume 2 of Fixing The Charts I think we're going to aim for all seated venues and really embrace the cabaret feel of it.
This show was filmed at Union Hall, Brooklyn by our friend Alex de Campi
If you want to buy the album it is available HERE and Merch is available HERE and when I get back home HERE
Posted by THE EDDIE ARGOS RESOURCE at 17:42 1 comment:

Back In Salem. Weekend Round Up.

We spent all day Saturday taking our songs apart and putting them back together again with Black Francis conducting us. Everything is now sounding at least as twice as awesome.
Here is Ian recording a guitar solo in the bathroom for our new song 'Axl Rose'.

And HERE IS is a 360' Image of the studio. My face really is that wonky.
Posted by THE EDDIE ARGOS RESOURCE at 10:35 3 comments:

If the Art Brut twitter feed is to be believed, I spent all day yesterday looking at pictures of dogs dressed as people whilst Black Francis wrote the record. 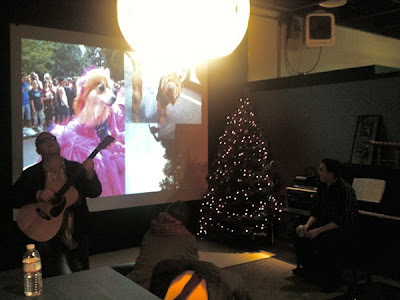 This is not true.
I spent all day locked behind some patio doors shouting for your entertainment 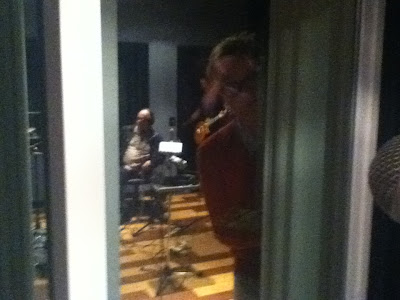 I'm even trying to sing a little bit. It is going very well, at this rate we will end up with a double album by christmas.
Posted by THE EDDIE ARGOS RESOURCE at 08:31 2 comments:

I intend to write every day no matter how boring it is.
Yesterday we did lots of this 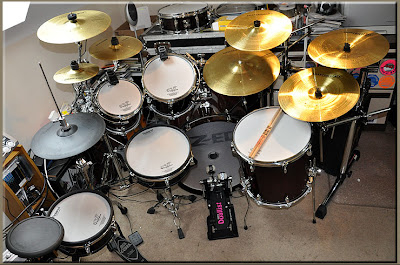 And if your interested, it turns out an SM57 after lots of trying of other mic's is probably the best one to use.
It was great to see Black Francis and Jason again, hard to believe its been two years since we recorded Art Brut VS Satan. I can't wait to start shouting all over this record. Hooray.
Posted by THE EDDIE ARGOS RESOURCE at 10:27 2 comments:

Back In Salem- The Journey So Far.

Art Brut are back in Salem recording our new album with Black Francis.
Actually we haven't started yet. I've just woken up on the first day refreshed and ready to go. It was a long journey to get here and I slept for most of it.
The five of us headed out on two separate airplanes. Mike and Fred went via San Fransico to Portland and Ian, Jasper and I got to Portland via New York on Delta. This isn't because we needed space from each other or anything, just because we are all flying back at different times.
It seems it was training day at Heathrow and we were the test subjects. I'm guessing we were the first people the security person we spoke too had ever had too clear. He had some questions I'd never heard before.
"Where did you pack your clothes?"
and
"How did you get to the airport?"
After he had gone to his supervisor to make sure we were ok to go, he came back over with a few more questions. The first was
"Do you ever make videos?"
Which I thought was a weird one, and made me slightly worried that he had seen THIS and wasn't going to let me fly. Then he asked
"Do you ever use professional actors?"
To which we lied and said yes (the real answer being no we cant afford them). Then it all became clear when he said.
"Because I'm only working here till I get back on my feet acting wise, I mean I've been in an episode of Spooks and in the backround of Torchwood and I even did an advert"
Then his final question.
"Can I send you a head shot?"
I gave him Jasper's email address.
Then we got on the plane and flew with Delta's really grumpy old lady cabin staff across the atlantic, trying to make them smile or at least be civil to us, with no success.
We had to change in New York and get on another plane to Portland. As I sat in my new seat a friendly American (you know the sort) asked me if I was allergic to cats. I thought it was a pretty unusual conversation starter but he had a cat with him under his seat. Apparently it costs nearly twice as much to fly a cat as it does to fly a person. I explained to him how cheap cats are to replace but apparently that was a bit cold of me. That didn't stop him talking so I suggested that next time he fly he shave the cat and dress it up as a baby as I think they travel free. Then to his relief the stewardess made me change seats.
I spent the entire flight asleep with my head sliding around on the seat listening to Bob Dylan and dreaming that I was rocking out. Which was embarrassing both in the real world as my head kept colliding into people and also in the dream world as I was actually listening to a lot of slow songs like Lenny Bruce and the people at the gig in the dream kept telling me stop dancing as I was ruining their experience. So I woke doubly embarrassed.
When we got off the plane, we immediately bumped into Mike and Fred who had arrived at exactly the same time. Although they looked a lot fresher than us.
We grabbed our stuff and our friend Jason picked us up to take us to our other friend Charles Normal's house where we are staying and is AMAZING. Then I slept some more, sadly I didn't return to the Bob Dylan concert to apologize for my behaviour.
We're just heading off to the studio now. See you later.
Posted by THE EDDIE ARGOS RESOURCE at 09:34 3 comments: