FORMED A BAND PAINTINGS FOR SALE. 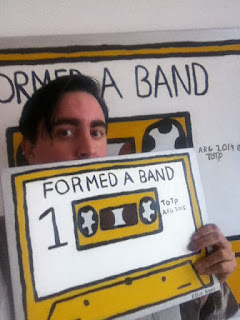 I really enjoy making the same painting over and over again.

I'm genuinely trying to make each one identical, so the slight differences that occur between each painting fascinate me, as do how the paintings change over time. What I'm doing is a productive form of naval gazing I guess, and also a form of mediation. It is very satisfying to come out of a very deep thought after hours of contemplation and find myself surrounded by paintings that I've made.

I retired a lot of my motif's last year. And have been working on a lot of new paintings.

I did not retire  Formed A Band though. Formed A Band is my favourite painting to make. I've made and sold more than 200 of them, all in different sizes.

I love the fact that there are hundreds of Formed A Band paintings out there, resting on peoples shelf's or hung on peoples walls. I'm an idiot, so believe in magic and I honestly believe that is a mystical energy being released from this motif being out in the wild, that powers my DIY endeavours. I'd turn it into wallpaper if I could and then try and convince people to plaster their houses with it. TILL I BECOME ALL POWERFUL.

While I didn't retire the Formed A Band motif. I did presume that everybody who wanted one already had one. I have had a few email requests though of people asking if they could buy one for their loved one for a Christmas present so I am making some this week.

For this week only if you'd like to buy a Formed A Band painting. You can get them from my shop. 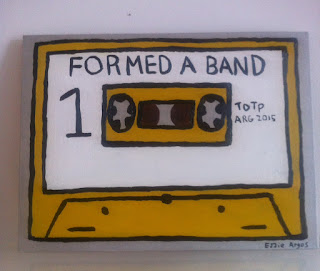 and they are HERE

And if you really like the Motif there is a MASSIVE one HERE
Posted by THE EDDIE ARGOS RESOURCE at 04:17 No comments: 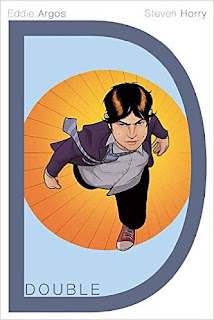 I have written a graphic novel it's a collaboration with Steve Horry who is brilliant and designed the covers for two of my books, Keith Top Of The Pops album artwork and a drew a picture of Art Brut posing like the JLI. All of which you can see HERE


Our book is called Double D and is about an overweight schoolboy who discovers he can use his excess body weight to fuel super heroic abilities.

The book is coloured by David Cooper, lettered by Colin Bell and edited by Alex Sarll. An AMAZING TEAM.

It is released Wednesday 11th November.

You can read two exclusive pages on Pitchfork HERE

Once you've read those previews you should go and order a copy. Thanks.

If you have never gone into a comic shop to order a comic before HERE is a handy guide from our friend Kieron Gillen
Posted by THE EDDIE ARGOS RESOURCE at 03:34 No comments: