Delivering Paintings By Adventure.Part One.

Last year I had the great idea of delivering paintings by adventure.

I put some very big paintings for sale at £850 each and offered to hand deliver them (with a performance of my spoken word show and some DJ-ing thrown in) all I asked was that you put me up for a night, fed me and paid my travel. I am in no way a Diva, I'm pretty easy going. I said I'd eat and drink whatever you are having and I can sleep on the sofa. The original blog is HERE.

I loved the idea, and I suppose writing the blog was more about me sharing that funny thought than actually expecting people to take me up on it. I mean I really wanted some adventure, but I was not sure of the likelihood.

So I was delighted when two different sets of people took me up on the offer. Both lead to two proper amazing adventures too. I have just not had a chance to write about them till now because I've spent every waking minute of the last year making paintings of peoples favourite album covers (with reviews).

The first exciting thing to happen was that the two different people tried to buy the same painting.

'Abstract Expressionsim is harder than it looks.....a lot of fun though'. 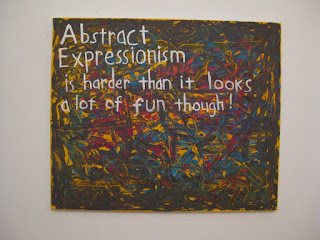 This is one of my favourite ever paintings of mine and I'd actually promised myself that this actual painting was the last one of these I would ever make. (I've made quite a few smaller and medium sized paintings of this in the past)

However, I can not resist the call for adventure. I checked with the person who first asked for the painting  (and me delivering it),  if he minded that I was thinking of making another, and I checked with the people who had ordered second if they minded me making them a newer version of the same painting. Luckily everybody was cool, and I was all set for two adventures.

The second painting was actually the first adventure. A couple called Erik and Adrienne wanted me to fly to NEW YORK to officiate their 10 year wedding anniversary. OFFICIATE that sounded like I might need to learn a new profession. This was going to be a great adventure.

I decided the easiest way to transport the painting would be not to make a new one here, but instead, to buy the paint and canvas in America and make the painting there at their wedding vow renewal party.

So far, so amazing, I was flying to New York to OFFICIATE a wedding anniversary because of ART and a funny idea I had. BRILLIANT.

Leading up to the trip, so I could write a speech for the happy couple, they both independently emailed me little pieces of information about each other. I liked them both straight away. It was weird and lovely to get a glimpse into their relationship, and again I thought about how incredible it was that ART had led me to this intimate moment.

On the flight to New York I got very nervous that what I was doing was illegal, that I was intending to make a painting without a proper visa and was going to get caught. I got very paranoid that maybe the TSA read my blog, which in hindsight is a little vain, and that they were going to be waiting for me at the airport. I had visions of them putting me in handcuffs and sending me straight back where I came from. Unsurprisningly the TSA do not read my blog and everything went without a hitch. I got through all the customs stress with no problems  at all, ready to start my adventure

It will not come as a big surprise to some of you that I am not a very organised person. Eric and Adrienne had bought me the flights I needed to get to New York and sent me the tickets. That part of the journey was sorted, also now completed. I had also booked myself a hotel near a train station that seemed to be on the route to where I needed to go. It is a testament to the power of google maps that I manged to get anywhere near where I needed to be. Leaving the airport I realised I had no idea where to go or what I was doing. I just typed my hotel name and 'art shop' into my phone. Luckily we are living in the future and that is all I needed to do. I managed to get paint, canvas and to where I was supposed to be sleeping at the push of a few buttons. Preperation is for losers!

The next day, at the train station, as confident as I was that all the information in my phone was right, I still thought I had better check with the train people to be sure.

The wedding anniversary was at a house in Greenport on Long Island.

Absolutely everybody I asked for train information refused to believe that Greenport is where I wanted to be going. Probably because I look a bit like an aging hipster and I was carrying a massive canvas and some paint they all said..

'Oh no, you're confused! You mean Greenpoint, you want to go to Greenpoint! Brooklyn! Not Long Island!'

and then tried to steer me on to the wrong train

This was my first clue that where I was going was off the beaten track. I've been to New York lots and lots of times. During the period when Art Brut were busiest I was in New York more than I was at home. But I have only ever seen the city. In my head all of New York looks like Brooklyn or Manhattan so to be on a train going through places called  Yaphank, Mattituck and HICKSVILLE! was a little disorientating. As was the fact I was carrying a massive canvas and a bag full of paint to a place I couldn't even pronounce, Ronkonkoma, to get in a strangers car (Erik's Mum) to be given a lift to a wedding anniversary, where I was going to be making a painting and a speech and then officially watch over and lead a renewal ceremony for some people that I didn't really know. 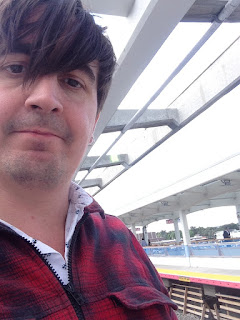 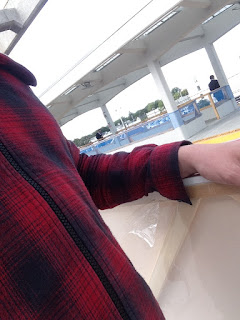 My thoughts at the time kept veering wildly between THIS IS AN AMAZING ADVENTURE. ART IS WONDERFUL AND SO MAGICAL THAT, IF YOU LET IT, IT WILL TRANSPORT YOU ACROSS THE WORLD AND TO NEW FRIENDSHIPS AND EXPERIENCES and I DONT KNOW WHERE I AM, WHERE I AM GOING, OR WHO THESE PEOPLE ARE! MAYBE THEY ARE GOING SACFRIFICE ME TO THE GOD OF LONG ISLAND (BILLY JOEL?) 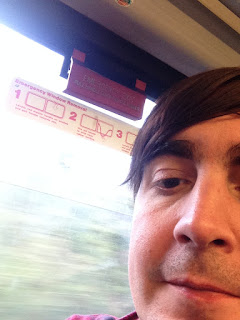 Did I make some amazing new friends? Or was I thrown on to a fire by a group of pagans chanting the lyrics to Uptown Girl?

I guess you already know the answer, but it is fun to end on a cliff hanger. See you tomorrow for PART 2.

I don't make the Abstract Expressionism painting any more, but if you would like a painting delivered by adventure. I am making Formed A Band Paintings (100cm x 120cm) on demand and would love to either make one and bring it to you, or make one at your house. They cost £850 and include me performing my spoken word show, DJ-ing and also if you need it me officiating your wedding vow renewal or similar.

I just need my travel paid for, a bit of food/drink and somewhere to sleep. The original blog is HERE.

I also do a smaller version that is blog is HERE


Posted by THE EDDIE ARGOS RESOURCE at 06:58 No comments: