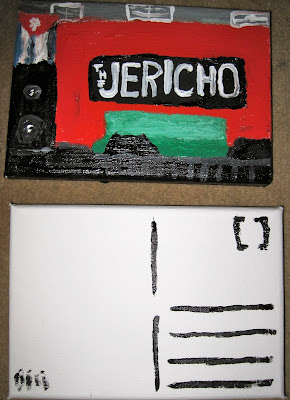 I really like postcards. I explain why HERE.
For EWITFR...N! I made a postcard for every show. I intend to do the same for Art Brut this year.

This postcard is for the Oxford Jericho which we're playing at tomorrow. I've never been there before but from my internet research. I see they have a green sofa on the stage and Cuban flags hanging over the speakers.

I hope the green sofa is still on stage when we play. Its been a while and I might get a bit tired halfway though the set.

This postcard cost £40 for that you get both the canvasses. On the piece of canvas which is the back of the Postcard I write in what happened the day of the gig personally addressed to you. I then add one of my own stamps.

I'll have it with me tomorrow. If you are interested email eddie.argos.resource@gmail.com

Thanks.
Posted by THE EDDIE ARGOS RESOURCE at 09:55 1 comment:

Eating In The Dark

Hello. My posts from the studio just before christmas ended rather abruptly sorry about that. I was learning to sing. The album is finished and should be out sometime in May.

Since recording the album I've moved to Berlin with my girlfriend. It is ace. My brother and his girlfriend came to visit last week so we got to do all the things tourists do. My favourite thing we did was to visit a restaurant called Nocti Vagus, a restaurant where you eat in the pitch black.

The first thing you do at Nocti Vagus is chose from one of four set menus. You do this upstairs where the lights are on so you can see. Three of us chose the meat menu and Hannah my brothers girlfriend chose the suprise menu. After you've chosen your meal you get taken downstairs to the dark room where you eat.

To ensure the dark room stays completely pitch black there is a holding room that you stand in before you enter. They turn off the lights in the holding room, open the door to the dark restaurant and then with your hand on the shoulder of the person in front of you you walk in to complete and utter darkness.

It was really scary at first. Your eyes are still trying to see things so you end up seeing lots of strange shapes. I don't trust my own mind whatsoever and was worried that it might suddenly decide to show me The Dungeon Master from the cartoon Dungeons and Dragons. I've been scared of that little fella for as long as I can remeber and because of that I forced my eyes shut for the first ten minutes. Whilst I was sat terrified with my eyes shut everybody else familiarized themselves with where the table was and where they were sat. I wish I had done this as when my first course arrived I realised I was sat about 2ft away from the table.

Once I found the table and then my soup and then my spoon and eventually my mouth I started to eat. The food really was delicious and my memory is so bad that it was like I had the suprise menu too. Once I started eating I began to relax a bit as the meal became more of a game, the trying not to get food all over myself game, I wasn't very good at it.

By the time I got to the second course I was completely relaxed. I was loving it. I was getting quite bold though. To see if I'd finished my plate of mash potato and lamb chops I put my hand flat on to my plate. I hadn't finished and my hand got covered in food. It was dark though so nobody could see me mucking about and licking lamb chops off my hand. This is brilliant I thought no etiquette. I was brought down to earth with a bump though when the waiter came back to the table and asked which one of us had used his dessert spoon to eat his soup, it was me. Even in the dark you cant escape cutlery based fascism. That is my only complaint of the meal though. I had a brilliant night. By the time it came to ordering our coffee I wanted to go round again and order another three courses.

Actually I had one other disappointment with the meal. It was with the suprise menu. I had been hoping through out the meal that it would turn out Hannah hadn't been eating anything at all. That her entire meal would just have been the power of suggestion.

To be honest though as we walked out into the light it turned out none of us had any food on us, not even me. So perhaps we had imagined all our food. If that is the case I should start trusting my mind more as my food was brilliant.

Posted by THE EDDIE ARGOS RESOURCE at 17:51 5 comments: 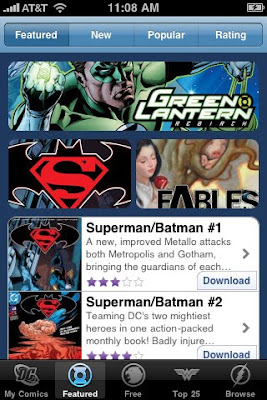 I wrote a new Pow! To The People supposedly about downloading comics. It was more a thinly veiled begging letter for comics though. You can read it HERE
Posted by THE EDDIE ARGOS RESOURCE at 12:37 1 comment: 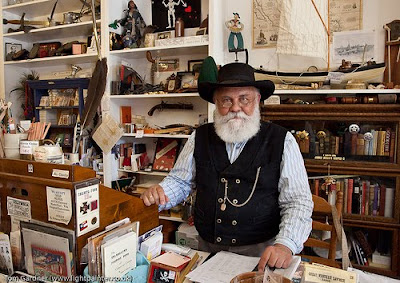 I am now a shopkeeper.
I've made a little shop for all of your Eddie Argos needs (well a few of them anyway). It is HERE
I made little paypal buttons to put under the items I am selling. This is mainly because I enjoy making buttons (and pushing them, I've already sold myself about three paintings).
You can still buy things from me by emailing eddie.argos.resource@gmail.com if you prefer. I like to hear from people so you can just email and not buy anything if you fancy that too. I'm a bit flakey though so might not reply straight away.
Posted by THE EDDIE ARGOS RESOURCE at 08:02 1 comment: