Here are Art Brut's US tour dates
I cant wait. We've enjoyed playing a lot of these venues before. In fact Im tempted to make a tour T-Shirt with the dates on the back and "Art Brut; The Glass Ceiling Tour" on the front.
Im looking forward to having my birthday in Austin.I turn Thirty on 25th October. Last time we played our own show there I couldn't drink as I'd been to the Dentist in Houston the day before and was on really powerful pain killers. Paul, the guy who does our sound, told me that I did the whole set in the style of Frank Sinatra. Im looking forward to rectifying the image people in Austin might have of me being a crooner.
The San Francisco show is going to be a strange one we're playing two shows in the same night. I think the first is all ages. We're going to play two completely different shows though if you want to see us twice. I think I might go for a costume change too.
We are taking Princeton (Cambridge through to Seattle) and Surfer Blood (Denver onto NYC) with us they both sound pretty ace to me.
Come down and talk to me about DC Comics and The Replacements.
Posted by THE EDDIE ARGOS RESOURCE at 17:49 5 comments: 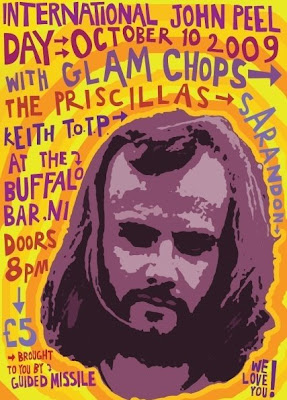 Glam Chops are playing International John Peel Day at The Buffalo Bar in Islington on 10th October.
Its been a while since we've played so we're rehearsing loads as not to be rubbish.
The line up is pretty amazing The Priscillas, Sarandon and Keith Top Of The Pops And His Minor UK Celebrity All Star Backing Band
I play the Bass for Keith sometimes but dont let that put you off.
Go and look at his Myspace 'Two Of The Beatles Are Dead' And 'I Hate Your Band' are two of my favourite songs at the moment.
I cant wait for him to finish his album.
You can get tickets for the gig HERE
Posted by THE EDDIE ARGOS RESOURCE at 10:39 2 comments: 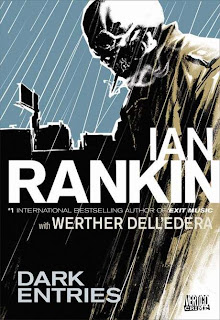 I have written a new Pow! To The People it is HERE
It's about Ian Rankin's John Constantine book 'Dead Entries'
I hope I wasn't to hard on it. I think as I'd only just finished reading so many other amazing Hellblazer books I was only going to be let down by it.
It must be hard writing a one off book that involves a well loved character. I hope he writes another one. I reckon the next one could be really good.
Posted by THE EDDIE ARGOS RESOURCE at 08:53 No comments:

The Daily Habit is an extreme sports TV show based in Los Angeles. We have been on it a few times. This may be because I used to pretend in German interviews that I was a pro skateboarder that had to stop after an accident, but probably not.
We were last on it a couple of months ago, but Im only just fully reading all my emails now. They sent me some embeded video link things, that I've just found so I thought I'd stick them here.
Here is DC Comics And Chocolate Milkshake. Art Brut make Jasper do funny walks/dances when we're bored if you look very quickly at the start of this video you can see a bit of his dance 'The Crab"

And here is Alcoholics Unanimous. It took a couple of takes to record it because people kept thinking it had finished when it hadn't and applauding in the gap which is why I am turning around to applaud the rest of them in the gap. Well that and I think they are AMAZING.

Its worth going to have a look at their site there are some pretty good bands on it. Its HERE
Posted by THE EDDIE ARGOS RESOURCE at 16:50 No comments:

It feels like it was ages ago now but here is Art Brut's trip around DC COMICS.
(From Pitchfork)

Here is part one in which we recommend our favourite comics. Like a stuck record, I recommend Booster Gold, Scott Pilgrim and Essex County.

Here is Part Two where we actually get to go to DC Comics. Look at my face I am over the moon. Pitchfork did a really good job of editing it you can barely tell how much I was geeking out.

And here I am the next day singing about the experience. Very much geeking out and drunkenly mispronouncing names in my thick British accent.

I dont actually remember saying any of that. I remember giving a guided tour ending in The Bat cave. There really is a Bat cave at DC Comics and a Bat signal. It is someones job everyday to come into work and turn on that Bat signal. Thats when I really started rocking out. I just couldn't help myself.

It is now my mission to get into the DC Comics library so I hope they don't see that video in which I imply I am going to roll around in their comics.
Posted by THE EDDIE ARGOS RESOURCE at 07:49 4 comments: 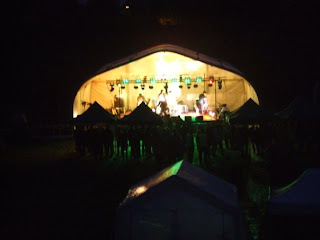 I am rubbish at updating this. I intended on writing a blog for every festival we played at to chronicle all the HILARIOUS hi-jinks we get up to. I obviously forgot though. So you will never know about all the other festivals that we taught how to 'Buffalo' or how we played at another festival called Lakeside that was a lot of fun and ended up with me smoking pot with a load of 'Hip Hop Dudes' in a sausage factory. Or how we supported a circus in Germany and spent all day complaining about all the 'fucking clowns'. To be fair none of it was that funny anyway.
Now that all the outdoor festivals are done though. I feel I should write about my favourite. My favourite festival we played this year was the Anonymous Festival in Dorchester.
The Anonymous festival was held at an old Roman Amphitheater in Dorchester and was organised by Dorchester Youth Extra. They are kids improving the area they live in. They got a skate park built recently too. It was a pretty surreal thing to play. All the other bands were from the local area. I was impressed with the quality of them. Local bands in Poole, which is where I grew up and just down the road, were all terrible when I lived there. Apparently the high quality now is due to a local studio all the kids get to use for free (or cheap) in Bridport. Of all the acts I saw the person I was most impressed with was a guy in the acoustic tent called Aiden Smith. He had loads of songs about stealing cars, drinking and all the women he has loved. Pretty impressive for a 15 year old boy.
The festival was pretty strange. Everybody seemed to have fun though despite the rain and the consequent closure of the climbing wall. My favourite part of the whole event is when they got the Dorset Youth Extra people to go up and say thank you to everybody for coming and for helping them put the festival together. The music took a bit longer than expected to come back on and they ended up ribbing each other, saying good bye to one of their best friends who was moving away and thanking almost everybody they knew for about 15 minutes, whilst the crowd just watched on confused. I think it was a very sweet moment and that it should be compulsury at all festivals.
Onstage at Anonymous I joked that as a child I had a dream, an ambition, to sing very personal songs in a roman amphitheater, reasonably near to where I was born, in the rain, in front of both my parents. As I was saying it though I realised it was actually a pretty amazing thing I was getting to do and got shivers up my spine.
So no jokes this time. Or mass 'Buffalo-ing' just a surreal but very warm experience in a roman amphitheater in the rain.
In my eagerness to big up the 'Kids' who put the festival on I forgot to thank Emma and her husband who both worked really hard for weeks probably months to put the festival on and let us hide in their house when it rained.
It was only the first Anonymous Festival but I hope it carries on for decades to come.
Posted by THE EDDIE ARGOS RESOURCE at 10:41 3 comments: