I went on Iyare Igiehon's 6 Music breakfast show the other week. Thankfully it is recorded in the afterrnoon. Afterwards he interviewed for for his comics blog Fantastic Realm here is the video.

He's edited it really well as I definitely rambled on for hours. I was obviously a bit confused about when Batman and Robin #3 came out too. It was out yesterday. I'm off to buy it now.
Posted by THE EDDIE ARGOS RESOURCE at 07:37 2 comments: 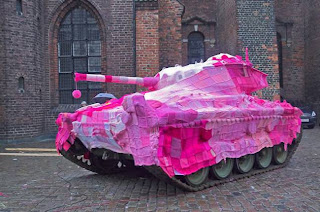 Art Brut played at Indie Tracks the other week. I loved it.
Unfortunately we were playing an acoustic festival in Austria the day before so I missed the first day of the festival. I would loved to have seen The Lovely Eggs, Camera Obscura and The Frank And Walters. I would also like to have seen the 'How Not To Run A Record Label' talk by Sean from Fortuna Pop, I could have made some notes and forwarded them to EMI. Never mind though I'm just happy I got to go to either of the days
We arrived late-ish on the Sunday, unfortunately after MJ Hibbett had played and in the torrential rain. The first band I saw were The Smittens. They were ace. I hadn't really heard of them before, but it is exactly the kind of thing I like. After they had finished I went back to the rest of Art Brut to enthuse about them. They all teased me for being 'Twee". I strongly disagreed that I was, before heading off to see a band that was a favourite of mine when I was growing up The BMX Bandits.
The BMX Bandits are quite "Twee". I enjoyed their songs a lot even though I am not twee. I know I am not "Twee" because I cringed every time Duglas T Stewart spoke between the songs. It embarrassed me. I disliked the way he acted like a primary school teacher and I resented being spoken to like I was a six year old. The songs were brilliant though and Twee or not eating an apple onstage is quite cool.
Watching The BMX Bandits sort of changed my opinion of the festival. I know Indie Tracks is a celebration of Indie Pop, a genre of music that I love, but the twee-ness of it all was kind of getting to me. Don't get me wrong I can find no fault with the festival whatsoever. It was perfect. I loved the fact it was at a Steam Train Museum, I even found the rain added a romantic element to the day. I think what was annoying me ever so slightly was "Twee's" appropriation of fanzine culture.
I read a lot of Fanzines growing up. My favourite bands were The Yummy Fur, Helen Love, Urusei Yatsura, Bis and absolutely anything on Damaged Goods (except The Manic Street Preachers) to find out about those bands I had to read fanzines. Those fanzines, in their own way, could be quite twee. The people that sold them were always dressed head to toe in Hello Kitty clothes and accessories, and more often than not they'd be selling them from a Miffy handbag. The fanzines themselves though were angry full of polemic and to the 18 year old me seemed quite subversive. There wasn't much angry polemic going on at Indie Tracks.
I really enjoyed Indie Tracks. I wouldn't change a thing about it and I understand it was an Indie Pop festival not a "Twee" festival. It just made me think I would like to see a slightly more Curmudgeonly festival in a similar vein as well.
I suggest someone else start it. I am terrible at that kind of thing. I propose it be held at Bovington Tank Museum. It can be called Indie Trax. We can try and talk Luke Haines to headline it or perhaps try and get all the bands from '...And The Rest Is History' to reform for a one off. I personally would like to stir up some trouble between those that prefer Hello Kitty and those that think Miffy is better. Sit back and watch them rumble. Probably in the rain.
Posted by THE EDDIE ARGOS RESOURCE at 08:27 11 comments:

We recently played a load of sell out shows in America. I don't like to boast about it, but we were the first band in the twenty five year history of the Mercury Lounge to sell out five nights in a row there. We are also the first band to attempt such a daft thing.
When we played our five nights sold out run at Schuba's we got to play with one of our favourite bands. Team Band.
Team Band are a band that formed after seeing us play in Chicago. I was demanding that people form a band and so they did. I think they are brilliant.
Live they sometimes play a song called Disco from my first band that I started when I was at school. The Art Goblins. In Chicago we did it as a duet
It was very surreal singing a song I'd written when I was 18 with them.
I think watching and playing with Team Band was my favourite bit of the whole American tour. I am very glad they took my advice and started a band. Although Im sure they would have done it anyway without my encouragement.
I am very much looking forward to playing with them again in Chicago on August 14th
Posted by THE EDDIE ARGOS RESOURCE at 15:56 6 comments: