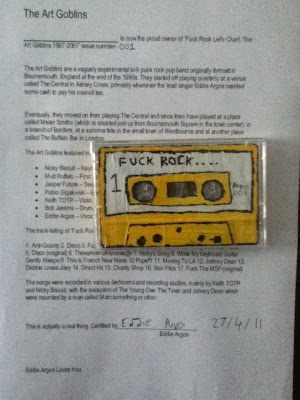 The Art Goblins album. It is a tape that actually plays and a painting. It is a compilation album more about which is written HERE

Each tape is numbered and comes with a certificate of authenticity (also numbered) and signed by me.


Also very limited offer. If you want a copy of the album and a green glow in the dark Art Goblin's 7"record (spilt single with Billy Ruffian). That will be £30 (inc P&P) and you can email me at eddie.argos.resource@gmail.com
Posted by THE EDDIE ARGOS RESOURCE at 09:11 No comments: 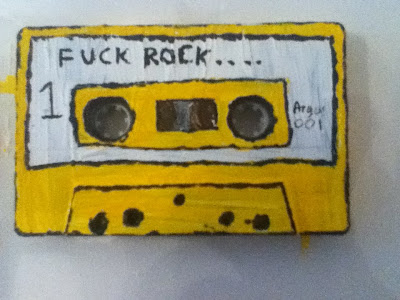 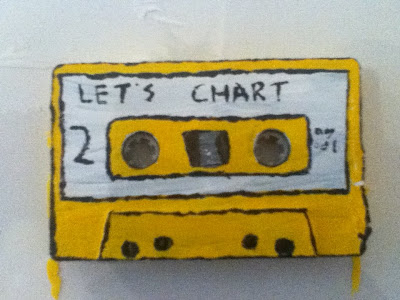 It leaked a little while ago and I kind of wish it hadn't. Surely part of the fun of getting a new album is in the anticipation in waiting for the release. Maybe that's just me though living in the past.

Anyhow it got me thinking about how albums aren't really physical releases anymore just songs floating in the ether. And although the Art Brut album is definitely getting a physical release both Vinyl and CD which again you can pre-order HERE. I thought it might be nice to turn the concept on its head and have a definite physical album you probably shouldn't really listen too.

So I have made an Art Goblin's compilation album.

It has seventeen borderline listenable Art Goblins songs on it.

The track listing is.

14,15,16 are actually demos of Future And The Boy songs (an Art Goblins side project). Any of the songs with the same titles as Art Brut songs are inferior earlier Art Goblin versions. Some of the lyrics maybe the same though. Track 17 is by my favourite Verwood based indie band The Welsh Elephant. Art Goblins just cover it so please direct your hate filled letters written in purple pen to them not me.

The Album is called 'Fuck Rock Let's Chart! The Art Goblins 1997-2007' and is made of acrylic paint and a cassette tape. All the tapes play. Although that doesn't necessarily mean you should play them.

Each tape is numbered and comes with a typed and numbered certificate of ownership which includes the tracklisting, a little bit about the band, including a list of all the members and recording details and is authenticated with my signature.

There is no free download or any of that. Just the tape and the songs on it.

I'll be putting them in my shop tomorrow, but for now email me at

The Art Goblins recorded from a CD straight on to a tape and then covered in paint. Is exactly the way these songs were supposed to be heard. Enjoy.
Posted by THE EDDIE ARGOS RESOURCE at 07:53 1 comment: