Hello. Christmas is coming and some people have emailed me asking if I can make prints of some of my paintings. I don't really like making prints as it feels impersonal. So instead I have hand painted tiny versions of some of my paintings onto 5 x 7" canvases using acrylic paint.
I've made and numbered twenty Clever Clever Jazz paintings 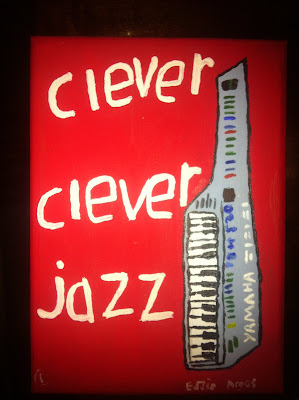 And made and numbered twenty different Sealand-scapes. 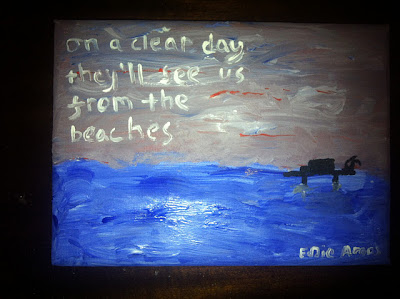 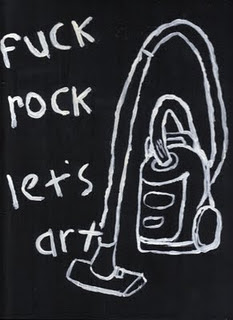 The 'Fuck Rock Lets Art' paintings are £22.50 including postage and the Clever Clever Jazz and Sealand paintings are £25 each. That includes postage to anywhere in the world.
If you would like to buy a painting email me at eddie.argos.resource@gmail.com
Posted by THE EDDIE ARGOS RESOURCE at 07:07 No comments:

Do you remember the Guerrilla gig craze of 2004/5 ?
It was basically a load of terrible bands that fell out of Pete Doherty's pockets and then got signed by Alan McGee playing in the street like gormless buskers, playing on tube trains because the NME asked them too or playing last minute gigs cash in hand as they needed money for crack. It was horrible.
Well I have a dark secret to admit Art Brut also did a Guerrilla gig, in fact we did two. Although I think they are both entirely excusable.
The first one we played is definitely excusable as it was for Rock Against Racism. We spent all day driving around London playing songs on the back of a flatbed truck and then handing out flyers. Here is some footage of us playing in Camden.
Don't we look young. Well the rest of them do, I've always looked a bit like I was in my thirties.
As well as Camden we also played in Brixton and Brick Lane (with The Others).
When we played on Brick Lane we were asked to stop by Gordon Ramsey (he didn't ask us personally one of his producers did) as we were interrupting a recording of Hells Kitchen with our 'noise'. This prompted my friend Keith TOTP to go round telling everyone that Gordon Ramsey was a racist. Which is fair enough I think.
The other Guerilla Gig we played is more shameful. My brother had just moved to London to live on my floor and we decided that with Chris Chinchilla (Art Brut's first guitarist) and our friend Micky Ciccone we would go and see Pete Doherty play a 'guerrilla gig' at the Troubadour in Earls Court. (he was supposed to be at Reading with the rest of The Libertines)
I can't stress enough that at this point (2003) there was no second Libertines album or shitty solo material. We went expecting to hear songs from the first Libertines album (which I still think on the whole is surprisingly good)
Anyway Pete turned up broke a string in the first song and then ran away, leaving an angry mob of people shouting for more. The support band wouldn't play another set for some reason. So the promoters asked if anyone in the room was in a band. Art Brut had only played maybe one show perhaps two by then and we weren't even all at the show but my brother immediately put his hand up and said yes we're a band. So Me, Chris, Mickey and My Brother all climbed onto the stage and improvised some songs. We played Modern Art, Bang Bang Rock And Roll (I think for the first time) an amazing Ciccone song called 'Last Tube Home' and a cover of Teenage Kicks.
For me it was a great night, I'd got to play Art Brut songs with Chris too by far our largest audience yet, play with Micky Ciccone whose band I had been a fan of for a long time and I'd also had a chance to be onstage in a band with my brother, who I think had been hitting a tambourine drinking Becks and smoking the whole time.
I had almost completely forgotten about that night though till a couple of weeks ago when playing at Moles in Bath I bumped into a man callled Andy who had been at the Troubadour show and so sent me this footage of it.

I especially like the fact that the promoter says 'Alright lads are you really a band?' as we clearly didn't look like one, well we weren't really.
I also like that I now have a photo of me onstage with my little brother probably from the same week I wrote the song about him. 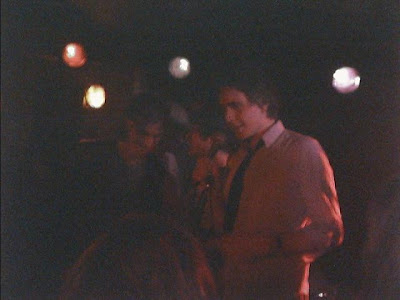 and finally I like that according to the Half Man Half Biscuit song Asparagus Next Left by playing a Guerrilla Gig in the middle of another groups Guerilla Gig I have played the ultimate Guerrilla Gig.
I have no idea who was playing the drums that night but I would like to thank that mysterious stranger. I would also like to apologise to the audience who I think due us playing didn't get a refund from the promoters for the show they were supposed to see.

Posted by THE EDDIE ARGOS RESOURCE at 10:39 5 comments: 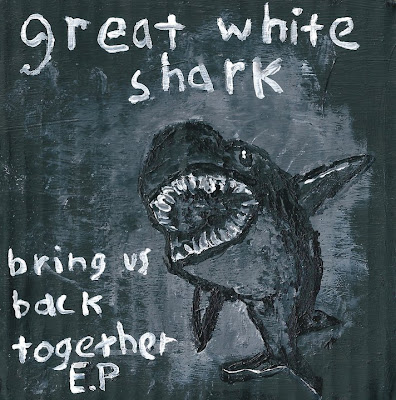 I made the front cover for Great White Sharks 'Bring Us Back Together EP'
As you can see it is a painting of a shark. The EP is great you can hear it HERE on their Facebook page and buy it from Amazon HERE
They are on tour at the moment
02.11 Wien - B72
03.11 Augsburg - Schwarzes Schaf
04.11 Stuttgart - 12zehn
05.11 München - Atomic Cafe
You should check them out they are awesome.
Posted by THE EDDIE ARGOS RESOURCE at 11:00 No comments: