This is the time of year when people list what favourite new music they have discovered, I do it too sometimes. But this year I've hardly had any time to listen to any new music.

I mean I've heard the usual suspects The Indelicates, Fightmilk, Ezra Furman all great of course, and I made time for Go Kart Mozart and Peter Perrett (both also amazing) and discovered Idles (who I have found out about late but are also fantastic) but other than that I've been painting and listening to other peoples favourite albums.


I had no idea this project would take off as much as it has, I've painted over 100 favourite albums now (I sometimes forget to take photos of them if I'm in a rush so they aren't all on my Instagram) and reviewed them all. It has been a strange year, with every spare moment taken up listening to someone else's favourite music.

I've written some pretty harsh music critisism in the past. I thought I'd be doing that with this too enjoying some albums and tearing apart others, but when it came to it, I found I couldn't do it. It just didn't seem the right thing to do especially if the album was intended a gift for somebody


'Happy Birthday! I got Eddie Argos to paint your favourite album, he FUCKING DETESTED IT'


'Congratulations on getting married I got Eddie Argos to paint the music you fell in love to, he thinks you are both idiots for liking it and your taste in music sucks'


I didn't want to do anything like that, so actually what turned out to be the most fun thing about the project was finding something I liked about each album. Even Bloc Party. 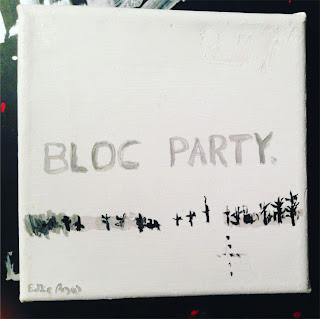 Going in to each new album with the mind-set 'Hmm I wonder what I will find to enjoy about this' made it a lot more enjoyable. I managed to emphasis the positive with every album, which not only helped me discover I have a broader music taste than I believed, but also, without wanting to sound like a fucking new age  hippy, changed the way I see life.

It turns out, life, not just album paintings, is much more enjoyable if you enter every new challenge with the thought. 'Hmm, I wonder what I will find to enjoy about this' I have decided to make it my mantra. So thanks to the Other Peoples Favourite Album Project for that.

As well as gaining what was probably, for other people, a blindingly obvious insight into a good mantra to live your life by. I did also discover some fantastic music that I would not have stumbled across by myself. I was also surprised that the people who got involved had such broad taste in music. I was expecting it all to be Helen Love, Hefner and Half Man Half Biscuit albums.

The two favourite albums I have discovered from painting have been Wild Honey by The Beach Boys and A Date With Elvis by The Cramps. 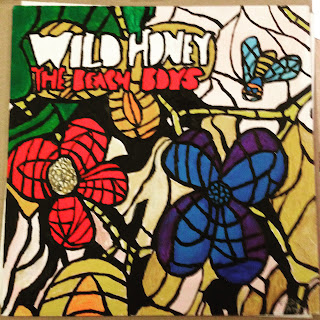 I was dreading painting Wild Honey if I'm honest. It was a complicated looking one and I thought

When actually its a perfect slice of bubble gum pop soul music. Its raw sounding, really funny in places and kind of sexy. None of those things were something I would have previously associated with The Beach Boys. 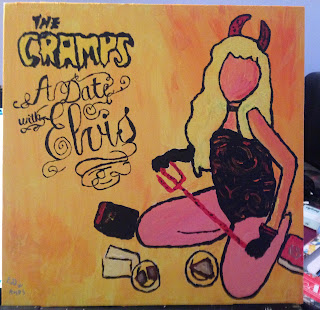 I was really looking forward to painting a Date With Elvis, as I knew a little about The Cramps from owning 'Best Ofs' and live albums. They were a band I knew I liked but had never really fully explored. I was delighted to find they were even filthier than I had been expecting with 'What's Inside A Girl?' and 'Can Your Pussy Do The Dog?' being particularly great examples. Loved it.

I also got to revisit a lot of albums I love like Midnite Vulture by Beck and Radiator by The Super Furry Animals, pretty much  every Pixies album and some Frank Black and The Catholics, as well as a few of my own favourite albums by Jonathan Richman, David Devant and Hist Spirit Wife and The Mountain Goats.

It was also interesting to see which albums got painted more than once, I painted two Meadowlands by The Wrens, Two Bang Bang Rock and Rolls by Art Brut, Two Frank Zappa's Hot Rats (another album I was not expecting to like but fell in love with), two Sgt Peppers by The Beatles and FIVE With Love and Squalors by We Are Scientists.

So if we are using this as a barometer of best albums ever (and I think we are) We Are Scientists win by three points.

I've really enjoyed making everybody's favourite albums, It really has taken over my life for a year though. There are still a fair few out in the post at the moment plus a few more I still need to paint. So I'm sure I'll write another blog about it when I paint the last painting.

I'm going to take commissions till the end of the year. So if you would like your favourite album painted. I do them in two sizes and the link is HERE

Thanks dudes! This has been fun.
Posted by THE EDDIE ARGOS RESOURCE at 07:57 No comments: