Hello. I've made a new series of paintings based around the song Alcoholics Unanimous. 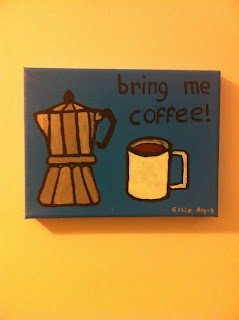 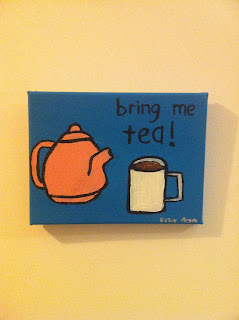 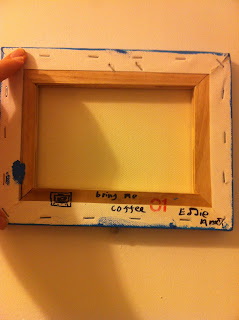 I really enjoy painting the same thing over and over and seeing the subtle differences, but I also really enjoy making my art personal for the person that receives it.


The paintings are acrylic on stretch canvas (18cm x 24cm) they cost £42 including postage to anywhere and are available from HERE
Posted by THE EDDIE ARGOS RESOURCE at 10:37 No comments:

End Of The Year Round Up.

I've never understood people that make their end of year lists in the middle of December. What if they get a really good book for Christmas? Or suddenly discover a brilliant album on NYE at a party.

All end of year lists should be written about a week into January, after a period of proper reflection, not spur of the moment half way through December.

I don't really like lists anyway, so here is a kind of cultural round up of the year.

First I should say I was really busy, I released a memoir, a graphic novel, toured a spoken word show, and had two art exhibitions. Quite a lot of stuff to fit into a year and probably frustrating for the people waiting for an Art Brut album, sorry.

While I didn't discover an amazing new album on NYE I did get a great book for Christmas, Russell Senior from Pulp's 'Freak Out The Squares'. Art Brut worked with Russell on a couple of songs a few years ago, his book made me wish we'd worked with him more. In fact, it actually made me wish I'd forced him to join Art Brut on the Violin. He would have caused loads of trouble. It would have been brilliant. Even if, for some unusual reason, you don't like Pulp, you should definitely read Russell's book it is hilarious and brilliant

Other than that, I read J.B Morrison's 'Frank Derrick's Holiday Of A Lifetime' which was fantastic. I've loved every one of Jim Bob/J.B Morrison's books but this one was really special. I read it all in one day over the course of a series of flights and trains from Berlin to some festivals in the middle of nowhere in the UK. I liked it so much that,despite having other books with me, I read it again on the way home. If you haven't read it you really should. I loved it.

I was a judge for the British Comics Awards this year and through that I read loads of great Comics and Graphic Novels. The books that I especially enjoyed were The Motherless Oven - which freaked me out as it seemed to be based in an alternative version of where I grew up in Parkstone, and The Rabbit. I also loved Metroland, which was not nominated but I picked up at Thought Bubble and of course Phonogram: The Immaterial Girl which I've been lucky enough to have read all of and is my favourite volume of Phonogram. My favourite comic of the year was Julia Scheele's 'I Wished I Was Married To The Sea' a beautiful little anthology of her work that I carried around in my bag to take out and look at/read for a couple of months after I bought it.

I began the year in a bit of grump about how terrible the state of music was at the moment, but this was pretty stupid and churlish of me as 2015 has been a great year for music. The height of my strop was at SXSW where for the first two days I managed to convince myself there was no good new music as the only decent band  I'd seen were The Pop Group - who formed in 1977. On my last day though I saw Hinds, Happyness, Honeyblood and Ultimate Painting who were all AMAZING and made me realise I was an idiot for being a grump.

Secretly the greatest band in the world, if only more people knew they existed,  The Indelicates also had an album out this year which you should buy as it is fantastic, as did The Nightingales also FANTASTIC and Mikey Georgeson and The Civilised Scene (also fantastic). I also played the FIDLAR album on repeat for most of 2015.

Luke Haines released an album too called British Nuclear Bunkers, which Im sure is incredible, but I don't listen to records that don't have lyrics on them - no matter how good they are. If you do you should check it out as I'm certain it was the best record without lyrics on it that came out this year.

My favourite album of the year - today at least, yesterday it was probably The Indelicates and the day before FIDLAR etc - was Ezra Furman's Perpetual Motion People, I've known Ezra for a long time and its fucking ace to see him finally get the recognition he deserves. I hope he becomes as famous as Prince, he certainly deserves to be.

I've definitely forgotten other records that I loved this year, which is a great feeling to have as it means there were so many. Hooray.

I'm doing my spoken word show in the UK and Germany in 2016 too. If you would like to come there are dates on my website

Hopefully see you there.

Posted by THE EDDIE ARGOS RESOURCE at 04:47 No comments: