I've spent the last two years painting other peoples favourite albums. I've loved it. I'm still doing it, although at the moment I'm only making three at a time and then taking them out of my shop so I don't get totally swamped with orders like I did last year. There is space for two at the moment if you are after one and I would get on it fast if you are thinking of getting someone one as a Christmas Present.

You can get them HERE.

To keep me sane, in between listening to other peoples favourite  albums I painted some Art Brut albums,  I know those guys pretty well and so didn't have to have them on repeat while I made them (sometimes its nice to paint in silence)

There are some It's A Bit Complicated's HERE and some Art Brut VS Satan's HERE
They both come with a lyrics sheet of your favourite song from that album and are already made (apart from the lyric sheet) so will go straight in the post when you order them.

Now that most of the other peoples favourite albums are in the post, I've started making some of my favourite albums. I've done this in chronological order of when I bought them (ish) and started with the first band I fell in love with Pulp.

I was 15 when Common People came out and I think it was the first contemporary song I'd heard that felt like it was for me. I remember seeing it on Top Of The Pops and having my tiny teenage mind blown. I rather embarrassingly thought it was by Suede as I hadn't been paying attention to either what Suede sounded or looked like, I just knew one of them had a floppy fringe because my Dad liked them.

Anyway, once I realised who it was by,  I found the single in Woolworths but  couldn't find the album that it was from as that wasn't out till months later. So with  my paper round money I attempted  to seek out all the old Pulp albums I could find. I had no way of knowing what any of them would sound like, so I just bought the most recent ones I could find, guessing (correctly) that the ones released in the 90's would sound a lot more like the band I was curious about than the ones recorded in the early 80's 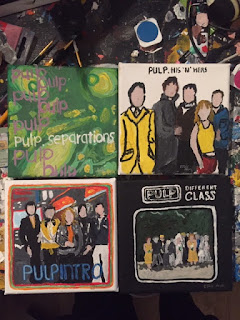 The first 'album' I bought was Intro, probably still my favourite Pulp album (or collection of Singles and B-Sides really) O.U might just be the best Pulp song, I fucking love it. I've just played it 5 times in a row. That whole album was perfect for me though as it scratched the itch of exactly what I was looking for at the time. Accessible pop music with an arty edge and great lyrics.


The second album I bought was Seperations (the secondhand shop I was buying my Pulp Cassettes in did not have His N Hers in it yet ) and I loved it. Countdown especially (actually maybe that is my favourite Pulp song) when I became a goth briefly a few years later this album stayed firmly on my CD player, it fitted in perfectly with that aesthetic too.

The third album I bought was His N Hers, I saved extra money to buy it new as I began to realise it would never turn up second hand. I liked it, not as much as Intro or Separations, but it made me feel mature and old and wise to hear all these songs about relationships and experiences that were just around the corner for me. (never stole a car to go to a reservoir, or hid in a wardrobe but you know what I mean) I went back to it after playing Different Class over and over though and ended up enjoying a it lot more and appreciating the nuance of it after being hit over the head with those pop bangers.

The Fourth was Different Class.

I loved this album straight away, of course I did it was the main event, the one I'd been waiting for. I didn't own a CD player so I was very jealous of my friends who had the changeable covers. Its hard to think about this album in any other way than it being the soundtrack to everything I got up to as a teenager. I carried it around everywhere with me, often changing whatever music was playing at parties to this. I hardly ever play it any more but that's probably because I don't need too. If  I think and reminisce hard enough I can hear it perfectly in my head.

and all other paintings. HERE

Posted by THE EDDIE ARGOS RESOURCE at 10:11 No comments: