I always intend to write a tour diary every day when I'm on tour. In the same way I intended to make a postcard for every show.

I bit off a bit more than I could chew this time though. So here are the edited highlights. I still intend to finish all the paintings I started too

I’ve traveled through nearly all of America since the last time I wrote.

We played in St Paul with our friend Raven whose band were brilliant. Whenever we play in the twin cities I inevitably get into a conversation about both the Replacements and the Hold Steady . This time was no exception and I ended up speaking to a guy who was convinced that his home address is going to be mentioned on the next Hold Steady album as it is literally the only place in the Minneapolis/St Paul area that Craig Finn has not put in a song yet.

After Minneapolis we played. Madison, Chicago, Detroit and Toronto with our friends Team Band. They were brilliant you can hear them HERE

It was nice to be back in Chicago with a different band. Art Brut played in Chicago so much last year it was beginning to feel like we were a local band. Chicago is a very generous place. Whenever I play in Chicago I get given some amazing presents . This time I got given a Replacements DVD, a Scotland Yard Gospel Choir album and a tin of exotic Vimto.

Vimto is my favourite drink (besides booze). I’d never seen this sort though. 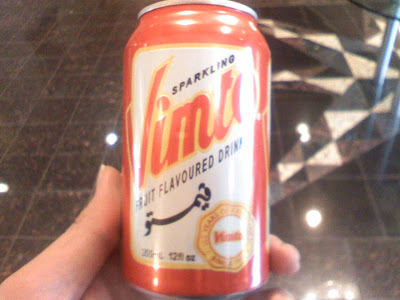 It was just a delicious as normal Vimto.

I treat Vimto like a live giving medicine. I had intended to save the Vimto till the end of the tour but I felt so bad from all the booze the day after Chicago that I drank it the second I woke up. In my mind Brandon who gave me the Vimto probably saved my life.

We also played a few shows with The Grates who were great you can hear them HERE.

We played Philadelphia with the Grates. In Philedlphia we stayed in the most terrifying hotel I’ve ever been too. For days people had been warning us about it. I still wasn’t prepared though. It was the Motel 6 by the stadium. The lobby was full of people who looked like Dog The Bounty Hunter. We parked our van in a spot where a van had clearly just been broken into. Using the theory that lightening wouldn’t strike twice. When I was loading the guitars into the hotel some people in the lift asked me what sort of guns they were I couldn’t tell if they were joking not. We got the sense that something pretty shady was going on on the 15th floor. The next day Ian and I kind of regretted Not going up for a nosey about. The Rolling Stones definitely would have. 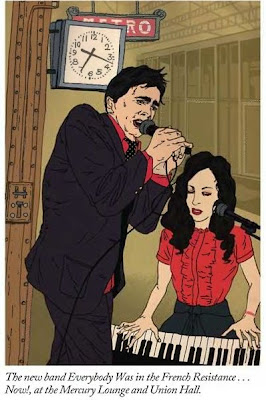 and I had a reunion of sorts with all the bands I'd played with when Art Brut did our 5 nights sold out residency at The Mercury Lounge last summer. We played with Murder Mystery, Phil And The Osophers and Les Sans Culloutes again and I bumped into Jeffery Lewis (pretty much completing the set) in the street when I was looking for a nice cake.

Finally there is a cat that has the same name as me that I met on Twitter. When we played in DC its's owner handed me this Postcard it had made of itself. 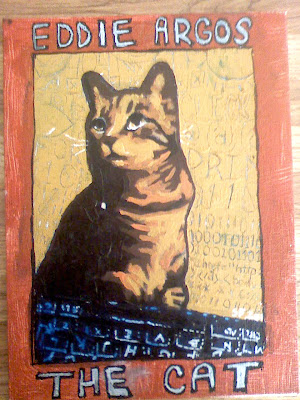 It is going up on my bedroom wall as soon as I get home to the UK.

I cant really remember much else of what happened. It was a pretty intense tour.

I started off making postcards for every show now I'm back in LA I'm going to finish the process. If you were at a show where I wasn't selling a postcard because I'd run out of time/canvas. You can email me at eddie.argos.resource@gmail.com and I'll sell you one. They are $50 dollars each. I'll pay postage as it's my fault I didn't have them in time.

Posted by THE EDDIE ARGOS RESOURCE at 17:50

"Vimto is my favourite drink (besides booze"

What about Vimto with booze?

Cider with a top of Vimto?
Vodka + Vimto?

There was this written about it:

'twas great to see you and Dyan, live and in person.