US Tour Second Half.

Leaving Canada for the US was an adventure.
It felt like we were sneaking back into the country via a secret route. We drove over a number of bridges that could just hold one vehicle, took a number of detours because some bridges weren't complete and didn't see another a car or van for the majority of the journey. Even the guy from US customs who checked our passports and told us he'd never heard of our band did all his work from within what looked like an abandoned house.
It didn't get much better when we entered the US we took this 'Freeway' all the way to Maine. 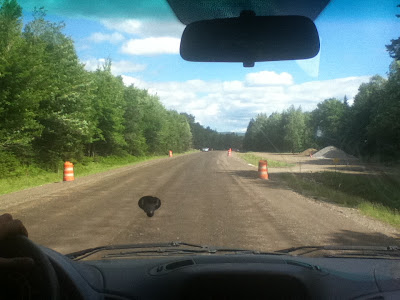 So after driving through the woods for a few hours we ended up in Maine. We had a day off so Ian and I spent it mainly eating Lobsters (Maine-ly?) It was great.
Refreshed we arrived in Boston rocked the fuck out and played our brand new song Atlanta Girls. I love playing songs live for the first time and pretending that any mistakes we make are part of some new avant-garde direction.
Then on to The Black Cat in DC and Maxwells in NJ. Both favorites of mine too. We have played these venues a lot. So often in fact that before we left for this tour we joked about making a T-Shirt that said 'Art Brut- The Glass Ceiling Tour' I don't care though I hope we play those venues forever, I love them. They were both all ages shows with actual kids turning up some who weren't even born when Formed A Band came out. I thought this was pretty cool, especially as a 7 year old in NJ had mad his own T-Shirt. I was literally talking to the kids, I think I taught them some new swear words.
Next up was our Brooklyn show at Williamsburg Music Hall. We had played there before too back when it was called North 6. It's nicer now. I really enjoyed the show and our new record label The End brought us a bottle of Brooklyn Gin as a present. This ended badly for me as later in the night fueled by the Gin I thought it would be hilarious to hide in the cupboard in the Hotel room whilst Mike and Jasper went out to buy beer and then leap out and suprise them when they got back. Unfortunately when they were at the off license they got invited to a party and went there instead of coming straight back. To be fair to them they did invite me to the party but I had been asleep in the cupboard for about an hour by the time I got the phone call, so decided to just go back to sleep.
I woke up in the cupboard the next day with just enough time, to go downstairs and get in the van, no time for a shower. We went and recorded the drunkest radio session in the world and then went to stink up the Marvel offices with the strong smell of stale booze that permeated from our bodies, breath clothes and hair.
You can read a bit of what we got up to at the Marvel offices HERE. Im amazed Janna managed to turn it into anything vaguely understandable. It was great fun meeting all the people that work there. I wish we could have taken them all to the pub and hung out unfortunately though we had to fly home and besides that i think we were scaring them a little.
We're next over for Sunset Junction in LA and a show at the Independent in SF see you then.
Posted by THE EDDIE ARGOS RESOURCE at 09:56

I loved the cupboard and the interview story!