I can't believe it has taken me so long to write up the second part of my first delivering paintings by adventure story. Especially as both adventures, this one and the one I did next, are two of my favourite things I've ever done. The first was nearly two years ago now luckily I can still remember it. If you need a refresher though HERE is part one. 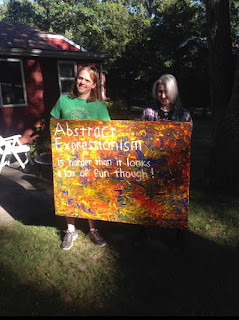 Anyway, where was I..

So.. I'd flown across the Atlantic to make a painting for two complete strangers, and to officiate their wedding renewal ceremony. I was full of excitement and a little nervous. I was going to a very remote house in the middle of nowhere. I'd already been on a train that slowly rolled past places with seemingly made up names like Hicksville and got into a car with a stranger and now I was very far away from anybody I knew, in an area with no phone signal. I was surprisingly unafraid though, my enthusiasm for adventure far outweighed my fear of being sacrificed on a fire to the gods of Long Island (Twisted Sister) or of being beaten up by a bunch of disgruntled Bloc Party fans who had pooled their money to get me on my own for an attack.

In fact I was not afraid at all, Erik's Mum, the stranger who had driven me the last part of the journey, seemed incredibly nice, Dayna who had also been in the car was also brilliant company, and when we arrived the booze I was helping carry into the house was of the very highest quality. I mean this could be a very convincing façade, but I was almost a hundred percent certain these strangers were not going to beat me up or kill me.

That was until two things happened simultaneously. The first thing was my phone suddenly started to work and texts from Ian Catskilkin came through asking if I was alright or if I'd been trapped in or some sort of Alan Partridge scenario, this suddenly put me on edge. The second thing that  happened - as I was reading these texts - was they asked me to carry some wine down into the cellar. Quite a dark scary looking cellar

If they are going to do something terrible to me this is the moment I thought as I headed down some old wooden stairs into the dark, worrying about the sound of the door shutting behind me.

I needn't have been afraid though, of course nothing terrible happened to me, in fact the exact opposite happened. Non terrible loads of amazing brilliant things happened to me.

I feel I should also clarify I was never really that scared anything bad was going to happen either, I just wanted some dramatic tension in my story. After the first couple of emails between me and Erik who was organising the event I went to follow him on Twitter and saw that I already did, I also followed most of the other people that were invited too and soon realised that pretty much everybody involved was an awesome dude that I sort of  knew from back when Art Brut used to play in NY every couple of months.

I emerged from the cellar safe, I was not beaten up for mean things I'd said in the past about Bloc Party, but was instead treated to an incredible Vegan lasagne and some delicious booze.

That makes it sound a bit like they were rewarding me for being mean to Bloc Party when they were in fact just very good hosts. I have no idea about their feelings on Bloc Party. Bloc Party has nothing to do with this story. I should probably stop making jokes about a brief fracas that happend 15 years ago.

I'd only really known these people an hour and they already felt like great friends, I was sat at the table, already having an amazing time and again I was overwhelmed that art had brought me here all the way across the Atlantic to this amazing place (and delicious food).

Sitting there with Erik and Adrienne was great too. They had sent me information about each other for the speech I was going to make at their ceremony, and I'd spent so much time working on it that in my head they had (almost) become fictional characters. So to see right in front of my eyes how much they loved each other was really special.

Full of lasagne and booze and excitement for the next day, I went to bed.

The next day was the ceremony. The house got busier and busier with more and more guests arriving. At parties I tend to be a bit shyer than people expect, in the band I am all extrovert and jumping around but  I can be a little introverted and shy when there isn't a microphone in my hand. It has always frustrated me that I can be like that, but this trip taught me the best way to deal with my occasional shyness and that is to be always making a huge painting in the corner of the room.

I had set my self up at the back of the main living room in the house and started to paint just after breakfast. All day long people came up to me and said hello. It is impossible to be introverted when you are making a great big piece of abstract expressionism at a party because everybody wants to come and say hello to you. I got to meet everybody as they arrived and they were all awesome. Erik and Adrienne had definitely filled their life with brilliant people. 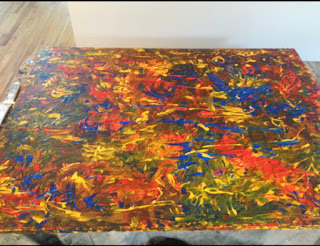 While the painting was drying, everybody gathered together and started the ceremony. This is where my memory fades a little bit. I know exactly what I said, I still have it, but I was so caught up in the event, and it felt so important that I do it right, that at the time I felt like I was hovering above proceedings watching a scene of two people very much in love renewing their wedding vows. Even thinking about it now it feels more like a great film I saw once than a real memory. 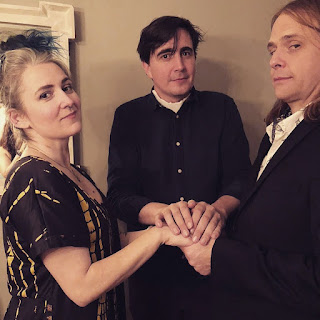 I definitely had tears in my eyes, but I think I managed to hide them. I am after all a lo fi Punk Rock Motherfucker, that can't be seen to be sentimental.

Part of my Adventure Delivery Service system is that I perform my spoken word show and also DJ.

By the time I got around to the spoken word part, I had been hanging out with everybody for ages, mainly talking about Billy Joel and how awesome he is for playing Madison square Gardens forever and also for driving his car into peoples houses on the way home. So when I perfomed my spoken word show it felt like I was talking to old friends as opposed to strangers, it was a very casual atmosphere that I loved. There were questions all the way through, especially from the Mums who were brilliant and hilarious. I feel like this might actually be the perfect way to perform my spoken word show, as an interactive after dinner speech. For the DJ-ing after just a little set from me, we were just sharing our favourite songs with each other like old friends with lots of love for The Monkees and more Billy Joel. Pretty much a perfect evening. Hooray.

The next day I had no plans, I thought I was just going to get dropped at the airport in the evening with a stinking hangover, but Adrianne and Erik had plans for me. They took me geocaching which I'd never heard of before but involved a walk along the beach and searching an old train for a secret compartment, we also saw jellyfish that light up when you touch them, talked A LOT about Magic The Gathering and went to a Camera Obscura, and on the way to the airport a vegan resteraunt where I had Cauliflower Buffalo wings, which are even nicer than real chicken wings and don't involve eating a chicken. I found a pretty good recipe when I got back to Berlin too its HERE if you want to try it. (recommended) 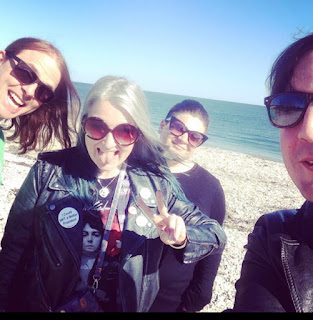 I've kept saying this but that last day really cemented it in my mind. I had made some proper really good friends for life. I was flattered that I'd been asked to be part of their ceremony and delighted at all the adventure I'd had and all of it was because of art, my adventure was fuelled by a painting. AMAZING.

Maybe it has taken me this long to write about it as that is the length of time it takes to get your head around something like that. A truly magical experience.

I no longer make this Abstract Expressionism painting. These were the last two. I still like delivering paintings by adventure though. If it is something you are interested in you can email me at eddie.argos.resource@gmail.com 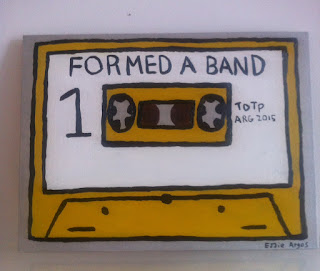 I will make a 100cm x 120cm Formed a Band painting at your house, place of work, doctors surgery, maternity ward, wherever you like, perform my spoken word show, and DJ for you all for £800 plus food (I'll eat whatever you eat) Drink (I'll drink whatever you drink) and somewhere to sleep (sofa is fine) as long as you pay the travel (budget airlines/Megabus is fine) 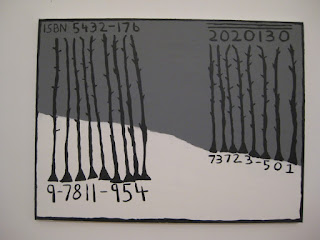 or  an adventure with this painting which I will bring with me (from my exhibition last year) 80cm x 60cm Acrylic on stretched canvas. for £650 (plus travel, food, sleep)


or a 70cm x 70cm of your favourite album. Email with the album and we'll work something out depending on what it is (Sgt Peppers will cost more then The White Album for example)


I have no problem with you charging people entry to the Spoken Word/DJ-ing. It might even be a good way to fund the transport of your very large painting.


I'm already looking forward to sleeping on your sofa.

Posted by THE EDDIE ARGOS RESOURCE at 03:45