WHAT I DID ON MY HOLIDAYS. 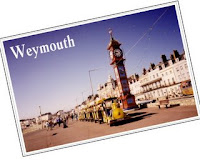 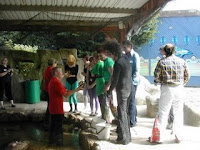 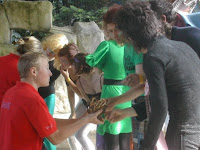 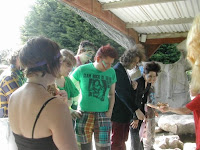 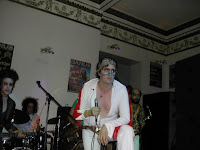 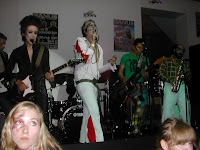 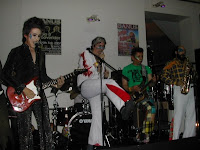 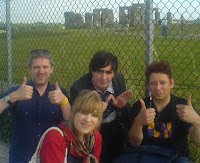 Glam Chops Played at Boring By The Sea in Weymouth on Sunday,their first European Festival.
In the day before the show (it is always a show with Glam Chops we've decided never a gig) we visited Weymouth Sea-Life Center in Lodemoor Park as unlike most Glam bands we dont drink like fishes we just.... like fishes.
We like fishes so much we very nearly missed our show which was at a place called Banus on
the sea the front I'm not sure how you pronounce it I'm guessing like anus but with a B in front as after we played I went to the bar downstairs to buy a drink and the bartender told me to leave as there were "normal" people drinking there and I wasn't allowed to stay,this is exactly the sort of segregation  my people have suffered since the early Eighties.I advise all those in the Glam Community to steer clear of this bar.
The rest of the Boring By The Sea Festival was fantastic I'm sad I didn't get to meet the fella that organised it I wanted to congratulate him on his amazing acheivment it was a cracking line up and full of brilliant people. Glam Chops fell in love with Weymouth especially everybody at The Queens Hotel I cant wait to come back and play for them.
Glam Chops are probably the only band in the world who have the organizational skills to get stuck in Glastonbury traffic on the way home without actually playing Glastonbury,especially as that traffic was about 70 miles in the wrong direction,still we did get to see stonehenge.
Dont forget we're playing the Marc Riley Show on Radio 6 this thursday and the Deaf Institute in Manchester afterwards.
Posted by THE EDDIE ARGOS RESOURCE at 18:29

Weymouth is blessed to have Glam Chops playing live there!!