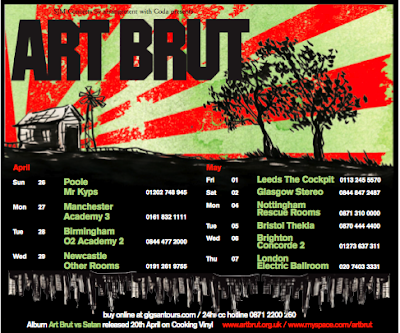 Art Brut V.S Satan is out on April 20th. So we are off on tour again. This is a very good thing as I have a booze habit I cant afford.
The first date is in my home town of Poole. The venue we are playing at used to be a pool hall. I'm terrible at pool but watching my friends play was often a lot preferable to being at sixth form. I spent a lot of time at Mr Kyps previous incarnation.
It is also a stones throw away from where Emily Kane used to live and next door to the venue where The Art Goblins played their first gig. Which with a thrill of horror I have just realised was twelve years ago.
There are also loads of charity shops.
I hardly ever go back to Poole. Im almost looking forward to it.
The rest of the tour dates are HERE and you can buy tickets HERE
Posted by THE EDDIE ARGOS RESOURCE at 17:36

Don't worry. We're just getting started I'm sure there is A LOT more touring to come.

I just added the shit out of your band on myspace.

No haste in getting the album out, jackinakanori. See you in Poole.

Portsmouth would be rad

This is going to be so great! Do you think there will be any US dates???

I have a remaining £40 from an overdraft of a grand. Do I buy tickets and a tin of beans OR dinner for a fortnight?

PS i opted for for tickets. art brut is the pork to my beans

fuck you for not coming to north america...
either way i'd have no way of affording a ticket to see you, but still: fuck you.

Please bring The Indelicates with you?