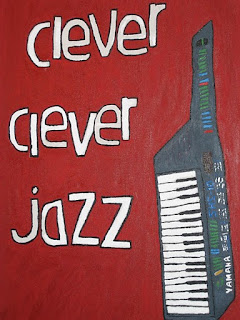 I have a pretentious Art Blog in which I'm attempting to make a painting for every song I've ever written. I sort of cheated this time and used one painting for two songs.
Those two songs are Skin Flick and Charity Shop by my old band Future And The Boy.
I think with Skin Flick I was trying to write lyrics like the Yummy Fur and Charity Shop was based around a short story I had written about a man finding all his possessions in a charity shop and then realising he was dead.
These songs are being released by Filthy Little Angel off shoot Leaving Home Records. They have pressed 200 of them and they are available HERE for £4 from April 5th (I think you can pre-order)
My pretentious art blog is HERE. It has paintings for sale and a story about my old band The Art Goblins.
Posted by THE EDDIE ARGOS RESOURCE at 11:32