I've been painting postcards. For reasons I explain HERE on the first blog which was London. I've also painted postcards for NOTTINGHAM, NORWICH, BRISTOL, and LEEDS. They have all been sold.
Manchester was the last UK show of the Everybody Was In The French Resistance...Now tour.
Here is the Postcard for Manchester. 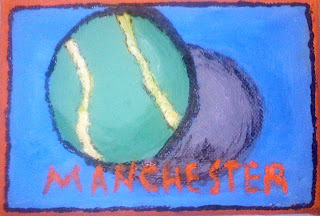 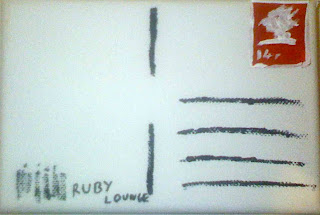 I know its not very rock and roll to admit but I have a bad back. My bad back is probably due to a combination of all the jobs that I've had that have involved lifting heavy things and my (very rock and roll) lackadaisical attitude to health and safety procedures.
My bad back comes and goes. When its at its worst though I can't stand up straight, can barely walk and am in a lot of pain. It nearly ended the last Art Brut tour when, in Amsterdam, I had to be carried to hospital. Luckily they gave me lots and lots of powerful painkillers and I managed to hobble through the rest of the tour.
On the EWITFR...N tour my bad back had begun to slowly get worse. By Leeds I was worried that I was going to seize up again like I had in Amsterdam. Luckily though Dyan had been told a neat trick by her physiotherapist. Apparently if you have the sort of bad back that I get you can get a tennis ball, place it under your back in the problem area, lie on the ground and roll around forcing the ball into your back and this will help.
I was skeptical. But the promoter in Leeds had brought me a tennis ball (taken from his dog). I lied down on it and rolled around the floor. It really did help. I spent most of the day in Manchester rolling around on my back, on the tennis ball, in a three piece suit (optional) and by the time we came to play the show I was fixed.
I couldn't believe it. All the pain I've been in over the last five or six years all I'd needed to fix it was a fucking tennis ball.
Anyway the tennis ball saved the show and now I carry one everywhere I go. So I've decided to paint a tennis ball for Manchester, the final day of the UK tour and I wish I had known about their magic healing properties before.
The Manchester postcard is made of two 100% Cotton Canvases (4"x 6"), Acrylic Paint and Sharpie pen. I will fill in the back with what happened that day and add a stamp that I have also made to it. (I will post it to you in a proper envelope with real stamps though)
It is £35 plus postage. There is only one and I would prefer to sell it to someone who was at the show Manchester or really really wanted to be there You can contact me at eddie.argos.resource@gmail.com
(I am not a Doctor. If you have a bad back. I advise you to seek a proper medical opinion)
Posted by THE EDDIE ARGOS RESOURCE at 12:41