This is the third postcard I've made. The other two are HERE and HERE. They have both been sold.
Here is the Postcard for Norwich 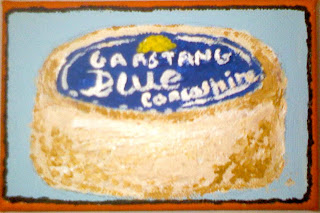 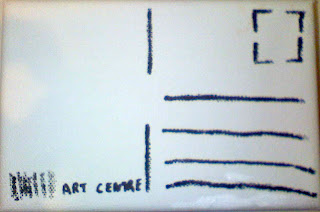 Norwich was the third day of the tour and our second with The Lovely Eggs. There was also a local band called the Grenouilles that played too.
I liked the Grenouilles a lot, but they were a bit of a peculiar band. They played very melodramatic chamber pop songs and then in between the songs they would tell jokes about cheese.
So you would have a powerful emotive song played on the violin and then
"What did the cheese say when he looked in the mirror?......Halloumi"
and then another dark acoustic song followed by
"What do you call a Cheese that doesn't belong to you?....Nacho Cheese"
A haunting wistful sad song was followed by
"How does a welsh man eat cheese when he is sat on the edge of a cliff?... Caerphilly"
It was a very enjoyable set.
The Lovely Eggs love Cheese and have a couple of songs about how much they love it. They had been talking about their love of cheese the night before and mentioned that they have a song about cheese that is so rude they never play it live in case their parents find out. It is about Garstung Blue. They played it in Norwich for the Grenouilles. It was quite rude. I've been looking for it online to link to it. But the song is so rude it must get taken down from the internet whenever it is posted.
The Norwich Postcard is made of two 100% Cotton Canvases (4"x 6"), Acrylic Paint and Sharpie pen. I will fill in the back with what happened that day and add a stamp that I have also made to it. (I will post it to you in a proper envelope with real stamps though)
It is £35 plus postage. And I would prefer to sell it to someone who was in Norwich or really really wanted to be there You can contact me at eddie.argos.resource@gmail.com
Posted by THE EDDIE ARGOS RESOURCE at 12:12