US Tour First Half.

I've been back from our US tour for nearly a week now and I've only just managed to stop talking like I'm about to introduce a song. I would hate to live with me.
The tour was ace though.
We started in Chicago, always a favourite place to play, and met Reptar for the first time. They were coming on some of the dates with us. I already liked them and it was cool to see them live. I'd not seen them before so was expecting them to look a bit like the Talking Heads (who I think they sound a tiny bit like). They didn't at all though, they looked like hippies, cool hippies but hippies none the less. They were ace.
After Chicago we went to Cleveland and I made a horrible mistake on the journey there. At home my girlfriend keeps me in check and makes sure I don't eat too many cakes. I had no girlfriend with me though on the route to Cleveland and Art Brut don't keep such a beady eye on my dietary habits.
I bought a Cinabon
Even as a professional cake eater it still intmitaded me so I intentionally chose the smallest least extravegent one I could find. When I took it to the counter though they covered it in cream, some sort of sauce and then stuck another cake on top. I promise I'm not making this up. Here is a photo of me eating it. 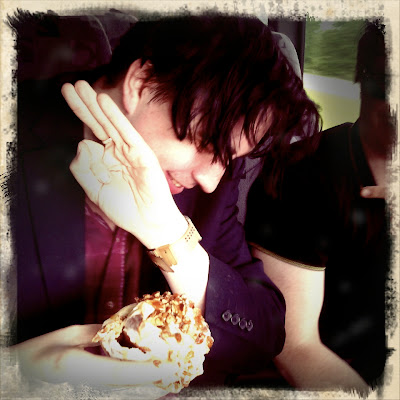 I could only take about two bites before I went out of my fucking mind on sugar. I bounced around in the back of the van like a toddler for 10 minutes and then completely passed out. I woke up weakened and confused for the sound check and then had to go to the hotel to wash all the caramel that was seeping out of my pores instead of sweat off. I swear I still smell like a cake now two weeks later.
Because I was in the shower trying to get rid of the cake sweat, I missed the first band in Cleveland but Jasper told me they were awesome and before I left I managed to nab a free CD. Well I don' think it was supposed to be free but I couldn't find anyone sober enough to take my money of me. So if you see Spacer Ace let them know I owe them $5 and have a listen to them HERE I love the CD so it would have been $5 well spent.
After Cleveland we went to Toronto for NXNE and played the Mod Club which was loads of fun and then because it was a festival we got to go and watch a load of other bands. My favourite was Sheezer an all girl Weezer tribute band. They looked like the Page Sisters from Jack Of Fables and only played the good Weezer songs. It was exactly as amazing as that sounds.
Then we went to Montreal played a show, ate pizza, got drunk fell asleep, woke up and started the drive to Portland Maine for our day off. Luckily I wasn't driving as I thought we were going to Portland Oregon and apparently that is on the other coast. It would have been very embarrassing had I driven and everyone had woken up 3,000 miles away on the wrong side of the country.
Posted by THE EDDIE ARGOS RESOURCE at 10:17

I can't say I enjoyed Reptar even 1/100th as much as I enjoy Art Brut but I'm glad for you that you were able to play with opening bands you liked. Also, the photo and description of the Cinnabon was pretty priceless. We like excess in America, which isn't easy for anyone remotely concerned with food consumption. Last time I had a Cinnabon was about 6 years ago and I still smell like cake!

that pretty much sums it up. also, i eat those fucking things every chance i get. they're amazing!

I didn't actually mange to see all of Reptar that first night as I was really busy, they were brilliant in Cleveland though.

Spacer Ace and MiniBoone who we played with on some of the other dates were ace too. Ive been listening to the CD's I pinched from them quite a bit since I've got back.

Josh I don't know how you do it. I had two bites and it sent me loopy.

Chicago loved having you, y'all sounded great! Reptar did sound pretty good but they looked like college drum cirlce refugees, it was intense.

I went to Florida a couple of years ago. Being a vegetarian and incredibly poor basically all I could eat was pizza and cakes. I ended up putting on at least a stone. One of the most hideous things I ate was a funnel cake sundae. Which was a funnel cake (which is a sort of deep-fried waffle thing the size of a dinner plate) covered in icing sugar, then covered in ice cream, then covered in chocolate sauce, then covered in whipped cream and sprinkled with chocolate bits. It was amazing. I just sat giggling slightly hysterically for a long time afterwards. Now I need to try a Cinnabon.

Hey John, I think you told me they look like a drum circle when we were watching them.

Lillian, Don't try Cinnabon I think just two bites put about a stone on me. It didn't even taste that good. The Funnel cake however sounds delicious.

I agree with the Cinnabon not tasting good bit. The taste does dot match the luscious look. Pretty much like Star bucks. Can't wait to read about the shenanigans in DC.

eddie i can't even walk past a cinnabon at the airport without gagging, i have no idea how you managed to get down even two bites. glad you've recovered though! sorry i couldn't make it to the lexington and we were out on tour while you guys were over here too... :-( hope we cross paths again sooner than later. new album is great!
peter

But what I really want to know is did Art Brut play hackysack with Reptar after the shows?