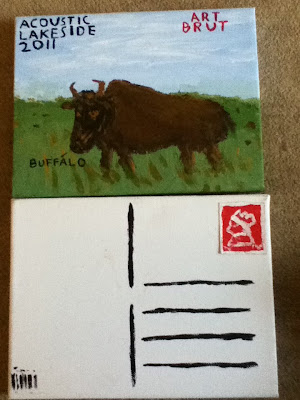 It is on two canvases slightly larger than the canvases I normally use and made of acrylic paint and sharpie pen.
I fill out the postcard to the person who purchases it.
If you are interested email me at eddie.argos.resource@gmail.com
Posted by THE EDDIE ARGOS RESOURCE at 07:19

Damn! I wanted to go but couldn't find any company.

I was laughing throughout all of your Acoustic Lakeside (as well as other) posts.
Hopefully next year we'll both be there or maybe someday have a beer in Slovenia (if not in Vienna in September).

i really hope you can come again next year because then we'll drink beer together again! drinking and talking with you was fun, thanks for that ;)

the blonde girl who betted that she'd get beer faster than you (:

Please for Christ sake please help me
I need your help and support to help PAY MY Tuition Fees. I need your only 3 to 5 minutes approximately

NOTE: Only ONE click is needed.
I will be grateful to you.
May God Bless You.