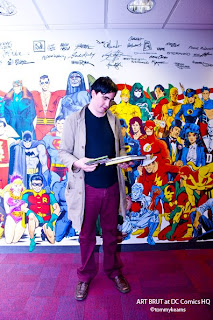 I wrote about DC Comics for Under The Radar magazine. I hope they don't mind me posting it here. I don't think that issue of the magazine is out anymore though so it should be ok.
I had to write about why I love DC Comics. Although I had to stick to only a few hundred words. Which I clearly found quite hard.
here it is
I love DC Comics. I have loved them since I was given a pile of Batman comics when I was ten. My only experience of Batman previous to that had been with the very camp sixties TV show. These Batman stories I'd been given, though, were much darker and far more complex than Adam West's goofing about on the television. I was surprised that the characters were expressing political opinions and shocked that people were getting murdered. I'd enjoyed comics previously to reading Batman, but I think deep down I'd always thought comics were only for children and that I was going to have to give them up one day. Discovering Batman made me realise that perhaps comics were something I could take with me into adult life.

Of course, Batman was only the beginning. Soon other characters started popping up in his stories that I wanted to know more about, and before I knew it I was collecting more and more comics. I tried other companies, too. I briefly had a subscription to the Marvel comic Spiderman, but gave it up after a long and boring story about clones. I still read other comics now and then, but it's only DC comics I have a subscription with. Other comic publishers just don't have the same long-muddled history that DC does. Superman's first stories were written in 1938, and Batman's in 1939, and there are a whole host of other characters from the '40s and '50s too. I think this is the main thing I love about DC - the constant struggle of the writers to try and reconcile their characters' long-complicated pasts with current storylines, and also their always-futile attempts to create a definitive universe that all the characters can live in. I can't think of any other art form or even comic publisher that has that problem.

I genuinely love DC comics. It is brilliant to have another universe to immerse myself in, especially when things aren't going my way. I've lived in some crummy houses, had awful jobs and some bad break-ups. But as long as I've had a DC comic to read, I've always managed to be happy. They are brilliant.
Posted by THE EDDIE ARGOS RESOURCE at 08:19

I've always been a Marvel Comics fan myself, though Batman and Green Lantern are pretty fantastic.

Firstly, that photo is amazing. I can't wait for your book on DC comics. I hope there's a certain amount of your own personal feelings about comics in it, because I truly enjoy the insight of the relationship between you and the comics. Your fidelity to the DC universe including your appreciation of it's ups and downs makes me respect you even more.

I actually suggested that Eddie should write his own DC Comic in my current interview with him:

THAT would be FANfuckingTASTIC!

who do I pressure to make that happen?