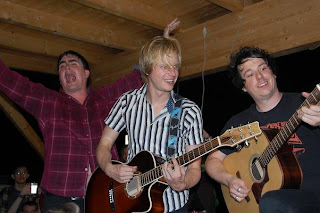 After my nap. I felt bit better and we headed back to catch the bands. It was a lovely festival but, as it was the first year, it was quite badly run and everything was running about an hour behind. I didn't mind this though as I already felt bad for missing some of the bands and it meant I got to watch Eight Legs.

I was sober as I arrived back at the festival but still felt drunk. It was as if I had so strongly linked being on that field with being drunk just being there again made me feel hammered. Also maybe it was just another strong association I'd made with the festival but I swear I could see strangers on the periphary of my vision playing Buffalo.

During Eight Legs set Jasper attempted to Buffalo Adam (Eight Legs Bass Player) whilst he was on stage. Adam had hidden an open bottle in his other hand and reverse Buffaloed Jasper from the stage, things were getting out of control.

After Eight Legs set I decided I should give in and start drinking again. Our friends Bishop Allen had turned up so whilst Justin (one of the singers in Bishop Allen) and I discussed our plan to stomp out bad poetry at open mic nights, the rest of Art Brut and Eight legs set about teaching Bishop Allen the game of Buffalo

-Justin and mine's plan to sort out terrible poetry is to start going to open mic nights and when we don't like a poem or a poet threatening them with a thick ear unless they shut up. If that doesn't work we are going to threaten them with a fight in the car park. I'm fairly sure we shouldn't be the arbiters for what counts for good poetry but at least the poets will be passionate about what they are talking about, if the threat of a thick ear is on the cards. Poetry slams will definitely be a lot more interesting once there is some actual SLAMMING going on.-

The festival was running really late now and Bishop Allen went on about an hour and a half late. They didn't Buffalo on stage but when they came off they complained to us that the sound hadn't been that good, as had Eight Legs. I don't normally mind about that kind of thing and both bands had been brilliant despite their bad sound onstage. As we were playing acoustic though I felt more vulnerable than usual, I was starting to get worried again.

Next up was the band due on before us Virginia Jetzt who were actually going on after we were supposed to have started. They sing in German and I'm all about lyrics when Im listening to a band so I only went out for a couple of their songs. At one point onstage the singer picked up his drink with his right hand and I'm fairly certain I heard a few Austrian voices shout Buffalo at him. He certainly had something shouted at him which made him looked confused. Then as I was heading back to the dressing room I saw a huge flash of lightning. There had been a threat of rain all day and now it looked like it was coming true. As Virginia Jetzt came offstage the heavens opened and it started pissing down.

There was a lot of talk about us not going on because it was too dangerous. We were not afraid though and got on stage despite the fact it was completely flooded. We got through about two songs before we were told we had to stop. I'd been psyching myself up all day to play acoustic though and by now really had to go through with it. I told the audience to squeeze under the tarpaulin at the bar at the back of the festival and we'd be down in a bit. Ian Jasper and myself ended up playing the gig stood amongst beer bottles on the bar.

I'm not sure how audible we were but we ended up doing two encores so it cant have been that bad.I think the fact that most of the crowd were singing along helped. For the first encore I asked if I could take a drink from someone to sooth my unamplified voice. Someone in the crowd handed me a beer. I took it in my right hand. About thirty people -not including Eight Legs, Bishop Allen and the festival staff who we had also taught the game- shouted BUFFALO at me. I hadn't been imagining it earlier, we had corrupted an entire festival.

For the second encore we were asked if we knew a cover everyone could sing along too. The only cover we know is The KKK Took My Baby Away and I wasn't sure how well everybody would know that. I was just starting to apologise when we realised, we knew Wonderwall. We had been playing it all day as a joke, people had been trying to teach me it on the guitar. It turns out even if you dont think you do, EVERYBODY knows the words to Wonderwall.

Earlier when Eight Legs had been playing I had recognised one of their songs. Now all the excitement had died down I finally got a chance to ask them how I knew it. It is, they told me whilst people downed beers and screamed BUFFALO in the backround, the music to an advert on British television at the moment, an advert to promote responsible drinking.

I loved Accoustic Lakeside festival. I can not recommend it highly enough. I am definitley going next year even though we are not playing. I will bring a tent though I dont fancy sleeping under the stars again

Posted by THE EDDIE ARGOS RESOURCE at 14:47

Eddie - it appears you don't know *any* of the words to "Wonderwall" *other* that "after all, you're my wonderwall." Looks like it was an amazing time. ;-)

nice meeting you at fest