I think its a fairly open secret that no one in Art Brut likes Jasper Future. He spends most of his time being a punching bag or an object of amusement for Mike and Ian. I don't bully Jasper myself. I tolerate him. In Chapel Hill Mike, Ian and Ed our tour manager started their morning by jumping up and down on Jasper and screaming at him. Im in the bunk above Jasper on the bus and consequently they woke me up by doing that. So I was bullied by proxy. It put me in a bad mood. I didn't blame Mike and Ian though. I blamed Jasper for being such a victim.
Since I have decided to write a tour diary every day I have had a bit of a worry that one day all I will have to write is that I spent all day reading comics. I think this is that entry.
We had drunk so much booze at The Black Cat the previous night. I think everybody was feeling bad. I know Jasper was as he looked terrible. I almost felt sorry for him. Because of my massive hangover all I could manage to do was buy a huge pile of comics and work on my nest. There was also some chocolate milkshake.
This is my nest 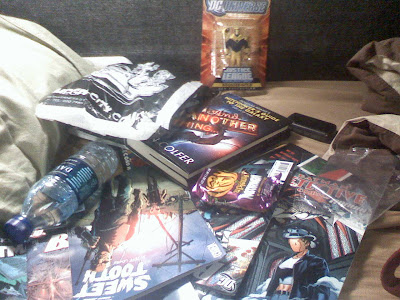 As I did nothing interesting yesterday I may as well tell you what Batman is up to at the moment. Batman is being AWESOME. I read the Batman Annual/ Detective Comics Annual two parter. It was brilliant. When I first read Batman and Son (the trade paperback in which Batman discovers he has a son) I didn't really enjoy it. It felt more like an episode of Jerry Springer than a Batman story and I found Damian really annoying. Now though I'm really liking the relationship between Dick Grayson's Batman and Damian as Robin. I don't care if Bruce Wayne never comes back. When we got to visit the DC Comic offices a few months ago they gave us a pile of new Batman comics. I'm now completely hooked and buy all the titles every month. It was a good trick.
I really enjoyed our show at the Cats Cradle.I think Princeton put on their best show yet. I was enthralled. It was also nice to see some proper dancing from the audience not just some jumping around. Jesse from Princeton did some crowd surfing during our song Post Soothing Out. I might attempt some crowd surfing to their song Calypso Gold at some point. Im a bit heavier then Jessie though so I'm going to wait till we have a crowd made up of strong men. As I don't want to be dropped.
If this blog has made you have any sympathy for Jasper. Keep it to yourself . The more sympathy he gets. The more Mike and Ian bully him.
Posted by THE EDDIE ARGOS RESOURCE at 11:46

Poor Jasper :(
I love him, even if you guys dont!

Strange, "Batman & Son" was actually the storyarc that got me into Batman and now I'm skipping this annual crossover.

How badly do you need him in the band? Could you maybe drug him them amputate his arm - it would be so funny when he woke up to discover he could no longer play the parts. I regularly do stuff like that to my band members - it keeps touring fresh and fun, and the gigs never sound the same

Jasper kinda looks like the dude from Kula Shaker... but J, in all fairness, is a way better guitar player, a bit posher too.

All of us St. Pauli/Art Brut supporters quite enjoyed Jasper's company at Cornelius's place! Even if he did refuse to do the crab dance.