Maxwell's in New Jersey was Art Brut's first ever US show. So despite all my jokes about this being a 'Glass Ceiling Tour' we were pretty excited to be back there.
First though we woke up at another Holiday Inn for a shower. Unfortunately there was no free breakfast to be stolen at this one. Although we were told that there was a free breakfast at the hotel over the road. Buoyed by the confidence of yesterdays easy breakfast thievery, we briefly contemplated going to the other hotel and loading up on cakes, coffee and maybe if we were lucky some sausage gravy. Stealing from a hotel we were not staying at though seemed a step too far and although Im sure it would be exhilarating dining on stolen cakes every morning. I was worried that I might get addicted to the adrenaline rush of nicking food and may be unable to stop myself from stealing brunch then lunch and eventually three course meals from fancy restaurants. It could be a slippery slope. I was also worried that Art Brut could get a reputation as breakfast thieves. So we all decided to buy sandwiches instead.
We got to Maxwell's about 2pm. Loaded in across 2 roads and the couple of blocks to the venue. Which I think counts as my cardio vascular exercise for the day/week. Even though I only carried in a handful of things and mainly supervised. I did make everyone tea though.
We were obviously playing with Princeton as they are doing the whole tour. They were awesome again. We had been wondering though who would be first on. It was Hot Panda an amazing band from Canada who I thought we had toured with before. We hadn't we'd played one show with them once in Edmonton. I'd spent all night drinking with them though and they drink a lot so it had felt like a whole tour. Was good to see them you should check them out. They are great.
We spent all night dodging people giving us free booze again. We seem to have somehow got ourselves a reputation.
The show was Awesome. I really enjoyed it. We played St Pauli for the group of St Pauli supporters who were there. Which felt good as I think Maxwell's was the first place we ever played that song. I definitely said it was the first time when we played it there before. But I say a lot of things and could easily have made it up.
My friend Keith Murray from We Are Scientists crossed the river to come and see us. I was telling him about the conversation I'd been having with Peter Hughes the night before about spreading rumors about people and ultimately about Peter's Glass eye. I wondered if Keith had any interesting secrets he wanted to share with me. He did. It turns out his bottom row of teeth are entirely false. It took a lot of convincing but Keith eventually let our drummer Mike take this photo of him with his teeth out, unfortunately you cant really tell, but trust me when he takes them out in the flesh its a pretty weird look. 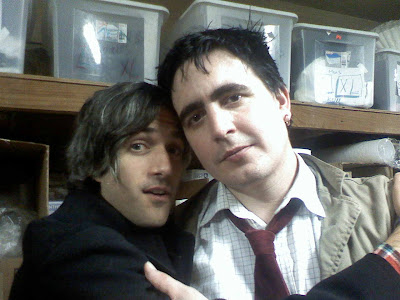 Another unusual thing about Keith that I found out last night is that he really likes it when people come up to him and start singing We Are Scientists songs. So if you ever see him in the street, at a bus stop, shopping with his girlfriend, sitting quietly somewhere reading a book or absolutely anywhere, just start singing to him. He wont be upset he genuinely really likes it.
Posted by THE EDDIE ARGOS RESOURCE at 12:15

Glad to hear you had a great show!

Unfortunately, nowhere to park a car in Hoboken near the venue. Maxwells has a terrible reputation for this.

Dean Wareham has less than favorable things to say about travel to the place in his book "Black Postscards" as well.

See you at the much more civilized Brooklyn surroundings (Brooklyn Bowl) next month. ;-)

This scene is dead but I'm still restless, an hour or so till last call I guess. I shouldn't even be here much less drinking myself into excess.